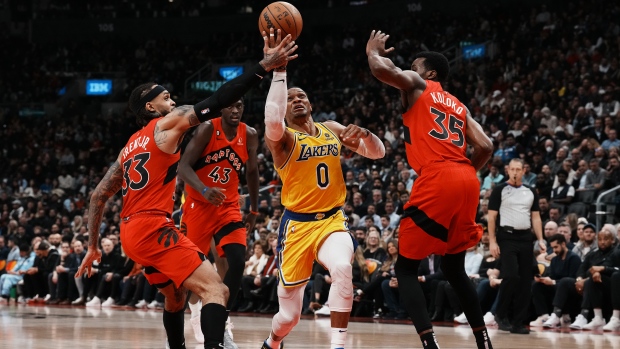 TORONTO - It was anything but pretty.

But Toronto Raptors guard Fred VanVleet was pleased with the professionalism of his team in dispatching a Lakers squad missing LeBron James and Anthony Davis.

Pascal Siakam had 25 points and 10 rebounds and the Raptors jumped on Los Angeles from the opening tip and never trailed in a 126-113 rout on Wednesday.

“I was just happy with our effort, our intensity, and we did what we were supposed to do.”

VanVleet also scored 25 points, despite shooting a dismal 3-for-12 from three-point range, while O.G. Anunoby added 23 points. Scottie Barnes had 13 points and tied his career high with 17 rebounds for the Raptors (13-12), who improved to 10-3 at home.

“I certainly like the effort (Barnes) is making to rebound because that's really what that's about,” Raptors coach Nick Nurse said. “You know he is playing hard if he is going to the glass that often and getting that many rebounds.”

Gary Trent Jr. chipped in with 18 points, while Chris Boucher had 16. Dennis Schroder and Russell Westbrook had 18 points apiece for the Lakers (10-14).

“Had to adjust the gameplan ... in the afternoon, but (we) did a good job of I thought stopping a lot of their transition, protected the paint pretty good. And I thought we shared the ball really well,” Nurse said.

The Lakers were one of the bad-news stories of the early season, stumbling out to a 2-12 record. But they had turned things around recently, arriving in Toronto having won eight of their previous 11 games.

The absence of their pair of stars, however, proved costly -- and made what had promised to be an entertaining night anything but.

The Raptors led from the opening tipoff, and by the time Trent scored on a running layup with five seconds left in the first half, Toronto was up by 26 points.

VanVleet led the way with seven points in a tepid third quarter for both teams, and the Raptors headed into the fourth with a 97-75 lead.

When the ball went up to start the fourth quarter, dozens of fans among the capacity Scotiabank Arena crowd of 19,800 had already zipped up their coats and left.

Anunoby's basket with 10:39 to play made it a 27-point lead. He checked out of the game about five minutes later to cheers from the fans still left in their seats. Nurse emptied his bench soon after.

The Lakers outscored Toronto by 10 points in the second half.

“As disappointed as I am in losing the game - you know, you never like to lose - I'm not upset, I'm not distraught, because we pulled it together and we competed like we should have done from the start of the game,” said Lakers coach Darvin Ham.

Both teams shot poorly from three-point range, the Lakers connecting on 21.2 per cent of their shots, and the Raptors shooting 27.9 per cent.

Toronto raced to an 11-point lead less than three minutes into the game, and while the Lakers clawed their way back to within two, the Raptors' lead never felt in doubt and they went into the second quarter up 39-31.

The Raptors pulled away with a 16-0 run in the second that stretched their lead to 21 points.

The Lakers shot just 1-for-11 from behind the arc in the second quarter with Lonnie Walker IV connecting on their lone three-pointer with 1.9 seconds left before halftime. The Raptors weren't much better, hitting a measly two of 14 three-point attempts, but took a 70-47 lead into the break.

Fans booed when the injury lists flashed on the video screen before the game. James didn't play due to left ankle soreness, the team said.

He sat out for the first time since missing six games in November -- one with foot soreness and five with an adductor injury.

Davis left Tuesday's loss to Cleveland with a non-COVID illness. He was recently named NBA Western Conference player of the week after averaging 37.8 points, 13.0 rebounds, three assists and 3.3 blocks per game.

The Raptors head to Orlando for a two-game series against the Magic, on Friday and Sunday. They're back in Toronto for three straight games beginning Dec. 14 against Sacramento.