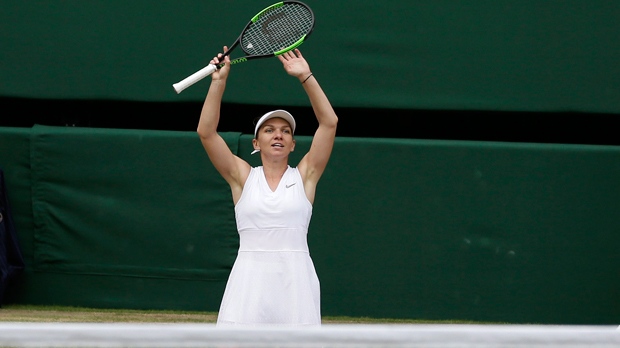 The Centre Court crowd kept roaring whenever Serena Williams would win a point in the Wimbledon final, seemingly trying to will her to make things interesting against Simona Halep.

Instead of earning an eighth title at Wimbledon and record-equaling 24th overall at Grand Slam tournaments, Williams fell one victory short yet again, beaten with surprising ease by Halep 6-2, 6-2 Saturday.

Williams has now lost her past three appearances in major finals - and five of her last seven. There's no shame in repeatedly making it to championship matches, of course, but it used to be rather unusual to see her come up just short like this: Williams won 21 of the first 25 Slam finals of her career.

“I definitely knew that she was just playing her heart out. I felt like, 'OK, what do I need to do to get to that level?”' Williams said. “I don't know if there's anything I could have done differently.”

After entering the final with a tournament-high 45 aces, Williams only managed two on Saturday.

She was broken in half of her eight service games.

Halep had a lot to do with that.

“I feel like I'm still incredibly competitive or else I wouldn't really be out here, per se,” Williams said. “For the most part, I feel like I'm on the right track. I'm just going in the right direction in terms of getting back to where I need to be.”

She hasn't won a title of any sort since the 2017 Australian Open, when she was pregnant. That was Slam trophy No. 23, breaking a tie with Steffi Graf for the most in the professional era.

It also moved Williams within one of Margaret Court's total, although Court won 13 of her 24 major titles before professionals were admitted to Grand Slam tournaments, while all 23 of Williams' major titles have come in the Open era, which began in 1968.

Since returning to the tour last season after her daughter was born on Sept. 1, 2017, Williams has reached the finals at three of six major tournaments she entered, defeated in straight sets each time.

A year ago, she was the runner-up at Wimbledon to Angelique Kerber, and then the runner-up at the U.S. Open to Naomi Osaka in a final that descended into chaos when Williams was penalized a game for arguing with the chair umpire. Williams recently revealed that she saw a therapist after that episode and sent Osaka a written apology.

She's also dealt with a series of injuries and arrived in England having contested only 12 tour-level matches in all of 2019. Just four of the other 127 women in the Wimbledon field had fewer; 105 had at least twice as many.

After losing to 20-year-old American Sofia Kenin in the third round of the French Open, Williams stuck around in Paris for medical treatment on her left knee. By the time she began preparing in earnest for Wimbledon, about 1 1/2 weeks before the start of play, she was pain-free.

According to the WTA's website, women's tennis pioneer Billie Jean King said recently that she would like to see what Williams could do on the court if she were to put “everything else aside” and “focus on what's necessary” for her tennis.

King added: “If she's happy doing it this way, then that's fine. It's whatever makes her happy - it's not about us.”

The last question of Williams' post-match news conference referenced those comments and asked for a reaction.

“The day I stop fighting for equality and for people that look like you and me,” Williams said, “will be the day I'm in my grave.”

Kate, Duchess of Cambridge, left, and Meghan, Duchess of Sussex sit in the Royal Box on Centre Court to watch the women's singles final match between Serena Williams of the United States and Romania's Simona Halep on day twelve of the Wimbledon Tennis Championships in London, Saturday, July 13, 2019. (AP Photo/Ben Curtis)