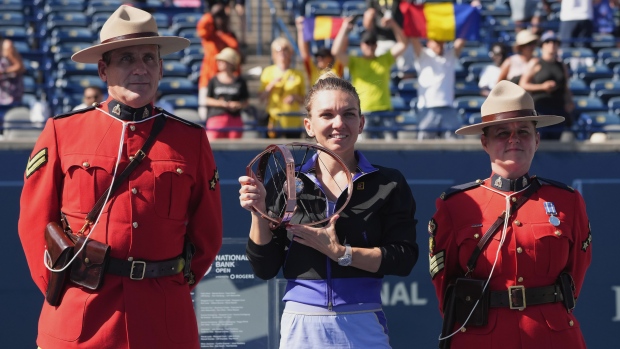 TORONTO - Simona Halep can't say which of her National Bank Open titles means the most to her, but she knows she'll never forget her third.

Halep beat Brazil's Beatriz Haddad Maia 6-3, 2-6, 6-3 on Sunday in the WTA event's final. The Romanian also won the title in Montreal in 2016 and 2018 when the tournament was called the Rogers Cup.

“It's tough to compare. I'm a different person. I've changed so much. But the happiness of winning a title is the same,” said the 30-year-old Halep with the National Bank Open trophy beside her. “This tournament is a pretty big tournament, it's a great tournament.

“It's a great victory, in my opinion. I really take it with both hands. It gives me an extra boost to believe that there is more to come.”

That confidence and optimistic outlook are marked changes for Halep, who admitted earlier this season that she was considering retiring from professional tennis in 2021 after falling out of the top-10 of the world rankings.

But this win - the 24th title of her career and first since switching to Patrick Mouratoglou as her coach in April - will propel her to No. 6 in the rankings.

“When I started the year I was not very confident and I set the goal to be, at the end of the year, top-10. And here I am,” said Halep. “So it's a very special moment.

“I will enjoy it. I will give myself credit. I'm just dreaming for more.”

The 26-year-old Haddad Maia has yet to win a tennis tournament at this level but she has rocketed up the WTA Tour's standings this year.

Haddad Maia was ranked 183rd in the world in 2021, but entered this tournament as No. 24 and will crack the top-20 next week based on her strong play at Sobeys Stadium.

“I think we are improving a lot every single day,” said Haddad Maia. “Not even in the matches, but, outside of the Tour, when we are practising.

“We are taking care of my body. We are doing good things.”

Some Brazilian fans - many of them in yellow national soccer kit - started chanting “Bee-ah! Bee-ah!” to cheer on Haddad-Maia as she took a 3-0 lead in the opening set.

“I think Brazilians are not used to cheering for tennis,” said Haddad Maia with a laugh. “Sometimes they scream a little bit more. They think they are in a soccer game.

Haddad Maia's supporters were soon drowned out by Romanian fans' chants of “See-moh-nah! See-moh-nah!” The sizable Romanian contingent had inspired Halep before she even stepped on centre court.

“I really wanted to win it in Toronto,” said Halep, referring to her previous victories in Montreal. “There are many Romanians here and they always come out to support me.

“I'm really happy that I could win also here.”

The chanting seemed to rouse Halep. A deep forehand return on set point was just out of the reach of Haddad Maia's extended racket and sealed six consecutive games for Halep as rallied to take the first set.

Haddad Maia shook off that stunning comeback by Halep to take a 4-0 lead in the second set. Although Halep took two games, Haddad Maia jumped out to a 40-15 advantage with the set at stake and then her serve handcuffed her opponent to force a decisive third set.

“I try to forgive myself, even if I miss, if I did something wrong,” said Haddad Maia about recovering to win the second set. “Even when I lost six games in a row, I think Simona wasn't playing her best tennis also so maybe she could be nervous as well at this moment.”

Halep's overhand smash at the net gave her a 5-2 lead in the third set and whipped the fans into another chant of “See-moh-nah!”

Haddad Maia stayed in the match, winning another game when her high backhanded volley dropped in to make it 5-3. Holding a 40-15 advantage in the ninth game of the third set, Halep clinched her first title in Toronto when Haddad Maia put her return into the net.

This report by The Canadian Press was first published Aug. 14, 2022.