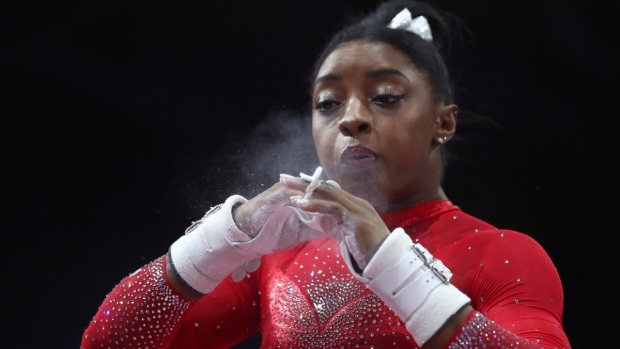 STUTTGART, Germany - Simone Biles won the women's vault competition at the gymnastics world championships on Saturday to tie the record for most world medals by any gymnast, but couldn't add another in the uneven bars.

Biles successfully defended her vault title on Saturday by sticking the landing on her two vaults, a Cheng and an Amanar, for a score of 15.399. Biles' U.S. teammate Jade Carey took the silver on 14.883, Ellie Downie of Britain was third on 14.816 and Canada's Shallon Olsen was fourth with 14.733.

That took Biles to 23 career world championship medals, equaling the mark set by Belarusian Vitaly Scherbo for any gymnast, male or female.

“Today went really good. I had a few little mistakes, but I'm just going to work harder for next time,” Olsen said. “It was a great opportunity to compete with the best in the world, and it was a huge blessing to compete for Canada with my teammates supporting me.”

The 22-year-old Biles had the chance to make it 24 in the uneven bars, but couldn't repeat her silver-medal performance from last year and finished fifth.

Belgian uneven bars specialist Nina Derwael retained her world title with a score of 15.233, ahead of Britain's Becky Downie on 15, one of two sisters to win medals Saturday. Sunisa Lee took bronze for the U.S. on 14.8.

Biles scored 14.7, finishing by sticking the landing on a dismount with two flips and two twists. The uneven bars has traditionally been her weakest event and was the only one in which she didn't win a medal at the 2016 Olympics.

Of Biles' 23 world championship medals, 17 are gold against 11 for Scherbo, who won his from 1991 through 1996. Scherbo competed at four world championships, against Biles' five, but the men's program contains more events.

Biles came into the world championships tied as women's record-holder on 20 with Svetlana Khorkina, but broke the tie with team gold Tuesday before winning her fifth individual all-around gold two days later.

A year after becoming the Philippines' first gymnast to win a medal, Carlos Yulo became his country's first world champion with victory in the men's floor exercise.

Last year's bronze medallist , Yulo performed the most difficult routine of any of the eight finalists to score 15.3 and beat Israel's Artem Dolgopyat by one-tenth of a point. Xiao Ruoteng of China took bronze with 14.933.

Yulo said he hoped his win would improve the popularity of gymnastics in the Philippines.

“Filipinos, they like basketball, but we're small. Maybe they should try gymnastics first. It's more fun,” said Yulo, who trains in Japan.

Lee Chih-Kai took silver for Taiwan on 15.433, while Rhys McClenaghan won the bronze on 15.4 as the first Irish gymnast ever to compete in a world championship final.