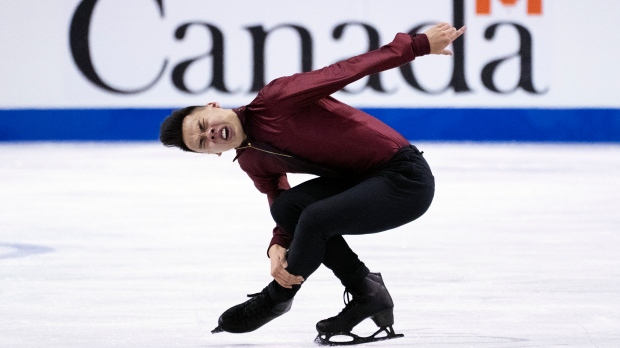 The cancellation of Skate Canada International didn't come as a surprise to Kirsten Moore-Towers.

It was still a huge disappointment.

Seven months after the world championships in Montreal were shelved due to COVID-19, Skate Canada International was cancelled on Wednesday amid concerns of rising cases in Ontario and tighter provincial government restrictions.

“It's incredibly challenging for athletes to train and to remain motivated with so many question marks,” said Moore-Towers, who competes in pairs with Michael Marinaro. “We do it because we love it, and because we want to be our best at worlds (later in the season). But it's tough having disappointment after disappointment.

“Obviously, in the grand scheme of things, it's such a small part of what the world is dealing with. But for us, it's been our whole lives for a long time.”

The Canadian stop on figure skating's international Grand Prix circuit had been scheduled for Oct. 30-31 in Ottawa in front of no fans, but Skate Canada CEO Debra Armstrong said with the recent 28-day shutdown of recreational facilities, among other venues that host large gatherings in the province's hot spots including Ottawa, and the “continuous shift of requirements across the country,” it became clear it wouldn't be possible to host the event.

“Everybody I think misses competing and we were ready to get back to it,” said Moore-Towers, a 28-year-old from St. Catharines, Ont.

It would have been the first competition for Canadian skaters since the world championships were cancelled just days before they were scheduled to open on March 16.

The rest of the season - Year 3 of the four-year Olympic quadrennial - remains a question mark. The Canadian championships are scheduled for Jan. 11-17 in Vancouver, and will likely be held with no fans, according to Skate Canada's high performance director Mike Slipchuk.

The junior world championships are scheduled for China, and the senior worlds - a key qualifying event for the 2022 Beijing Olympics - are slated for Stockholm, Sweden in March. They're both still a go, for now.

“With the skaters who are tracking for Olympics, we're really (telling them) 'You're in a kind of a year-and-a-half plan to Beijing,”' Slipchuk said. “And whatever competitive opportunities that we can have them do this year, it's a bonus, And then hopefully next year, we get into more of a semi-normal or normal system.”

Slipchuk said if there's a silver lining to the forced break, it's that athletes have had the chance to get fully healthy, plus focus on skills they wouldn't have had the time for otherwise.

“When we've been out on athlete visits, we've seen new jumps, basic skating has improved . . . and it's only going to make them better as we move forward,” he said.

Moore-Towers and Marinaro plan to “compete” in the Skate Canada Challenge, which in a regular season would be a qualifier for bigger national events. The Challenge was scheduled for Edmonton, but has been replaced by a remote event that will have skaters perform their programs at their home arenas, but under competitive rules, with full costumes, etc., then submit video.

“It's a different situation that we're trying to navigate just like everybody else, we miss Team Canada and all the opportunities we have to see our teammates and to take advice, and to get better and improve our craft because ultimately our big goal is Olympics and regardless of what happens now, we hope to still be our best there,” Moore-Towers said. “And so we need to figure out what the best way is to to continually improve in the best way we can right now.”

The six-event Grand Prix circuit has become primarily domestic competitions due to travel restrictions around the global pandemic, and therefore only open to skaters who live and train in the host countries. None of the others have been cancelled. Skate America, scheduled for Oct. 23-25, is being held in a bubble in Las Vegas, with strict health protocols including frequent testing, Slipchuk said.

Moore-Towers said the fact the other Grand Prixes are still set to go doesn't bother her.

“Honestly I'm going to enjoy watching the other Grand Prixes,” she said. “Just like skating fans, I miss skating greatly, and I think I'll try to use it as an opportunity to keep me motivated and to to know exactly what I need to do to be on top of everybody.”

The provincial government has restricted Indoor gatherings to 10 people for the hot spots of Ottawa, Toronto and Peel.

“We had drastically cut the amount of people to make (Skate Canada) work,” he said. “But as these numbers dropped, feasibly it didn't work, and then we didn't have the clearance.”