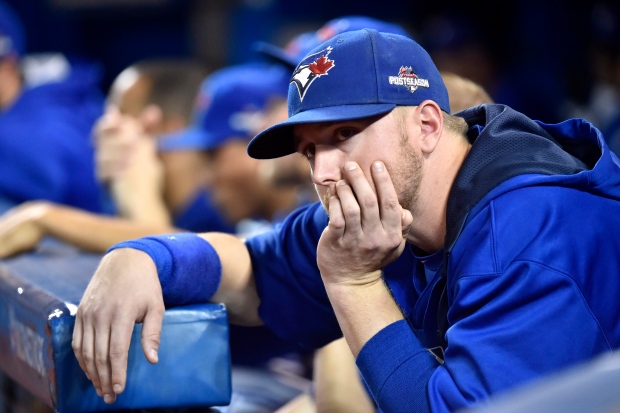 TORONTO -- The Toronto Blue Jays are keeping their options open.

First baseman Justin Smoak agreed to a two-year contract extension with the Blue Jays on Saturday afternoon with a club option for the 2019 season. The move comes ahead of a potentially busy off-season with nine other Toronto players holding expiring contracts, including all-star first baseman/designated hitter Edwin Encarnacion.

"We feel like he has the potential to play every day, but really it just comes down to alternatives," said Blue Jays general manager Ross Atkins on a conference call. "Edwin could be a DH and Justin could be playing regularly at first base, as he was earlier this year.

In seven major league seasons the six-foot-four, 220-pound first baseman has appeared in 780 games posting a .225 batting average with 101 home runs, 316 RBIs and a .310 on-base percentage. Smoak acknowledges he hasn't lived up to the expectations of his elite pre-draft status.

"No, not even close," Smoak said Saturday before the game against Oakland. "I know I can be a better player. It's all about staying consistent. That's what you strive for every day and that's the goal to keep working on ... to be a more consistent player."

Atkins, however, feels that Smoak has seen improvement every year and can become a starting infielder or designated hitter, if necessary.

"Seeing that potential of a guy who could become an everyday player and impact the team with a larger role, it felt like it made sense to see if he was interested in an extension," said Atkins, adding that negotiations were relatively quick, with the two sides sorting out the details over the all-star break. "It has no impact on our ability to sign Edwin Encarnacion, or anyone else for that matter.

Smoak, a starter with the Seattle Mariners for four seasons, has accepted being a role player with the Blue Jays.

"Whatever it takes to help this team win ball games."

Signing Smoak to an extension was a priority for Atkins as the Blue Jays have, in addition to Encarnacion, eight players with expiring contracts. Slugger Jose Bautista, Canadian all-star left-fielder Michael Saunders, veteran knuckleballer R.A. Dickey, as well as relievers Franklin Morales, Gavin Floyd, Brett Cecil, Jesse Chavez and Drew Storen could all become free agents or head to arbitration in 2017.

"We have to get work done," Atkins said. "We have a busy off-season ahead of us. ... We saw this as an opportunity and a short window to see if there was something there with Justin and it turned out we were both really efficient."

Adding a wrinkle to the Blue Jays' plans is the pending return of corner infielder Chris Colabello. He's begun a rehab assignment with Class-A Dunedin and is eligible to play for Toronto again on July 23 after serving an 80-game suspension after testing positive for the anabolic steroid dehydrochlormethyltestosterone.

Although Colabello could add depth to the Blue Jays' bench -- and even back up Smoak at first base next season if Encarnacion leaves the team -- Atkins says the team doesn't have a concrete plan for Colabello.

"It's complicated by what the alternatives will be, how he's performing, the fact that he's had so much down time," said Atkins. "Secondarily, what that means going forward for someone who's not going to be a part of our playoff roster."