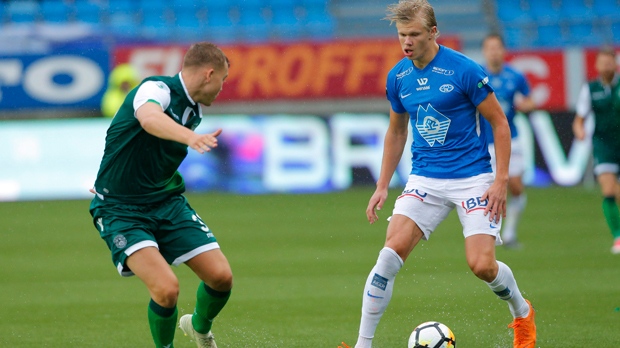 Mention the name “Haaland” to the average soccer fan, particularly someone from England, and thoughts might go back to one of the most vicious fouls ever committed in the Premier League.

That day in 2001, Alf-Inge Haaland - playing for Manchester City at the time - was on the receiving end of a studs-first challenge on his right knee by Manchester United captain Roy Keane at Old Trafford that brought about threats of legal action and resulted in a long ban for Keane.

Eighteen years on, there's another Haaland rising to prominence and with a strong likelihood of making a name for himself in English soccer.

Erling Braut Haaland, the 19-year-old son of Alfe-Inge, is one of the most talked about young players in the world around because of his scoring exploits on the youth international scene with Norway, in the domestic league in Austria and - most recently - in the Champions League.

By netting three first-half goals for Salzburg against Genk on Tuesday, he became the third-youngest player to score a Champions League hat trick , after Raul Gonzalez for Real Madrid and Wayne Rooney for Man United, and took his season tally for the Austrian club to 17 goals in nine games. That now includes four hat tricks.

Oh, and there's also the small matter of Haaland scoring nine goals for Norway in an Under-20 World Cup game against Honduras in May. It wasn't a surprise that he was immediately called up to the senior Norwegian national team, making his debut in the recent European Championship qualifiers against Malta and Sweden.

Standing at 1.94 metres (6-feet-3) and easily identifiable with his broad shoulders and swept-back blond hair, Haaland cannot be missed on the field. Still a teenager, he is already an intimidating presence by the way he can shrug off opponents and drive forward with the ball at his feet. He clearly knows where the goal is, too.

No real shock, then, that he is already being linked with some of Europe's biggest clubs, including in England - where he was born while Alf-Inge was a Premier League player.

“His heart is close to England so he'd like an opportunity to go to England, maybe even in January,” said PÃ¥l Fjelde, a former teammate of the younger Haaland at Norwegian side Bryne. “I'm not putting more pressure on him, but as long as he keeps his attitude and his feet on the ground, he will continue to progress.

“This is just the start.”

Haaland has already spoken of one day playing for Leeds, the northern city where he was born (his father played for Leeds). Fjelde also says he has heard Haaland speak about Man City - his father's final club before retirement in 2003 at the age of 30 because of a serious knee injury. The Haaland family then moved back to Norway, when Erling was 3.

Given what happened to his father at Old Trafford all those years back, a move for Haaland to the red half of Manchester appears unlikely, even if United is now managed by Ole Gunnar Solskjaer - a compatriot who recently coached Haaland at Norwegian team Molde for two seasons from 2017.

“He is probably not the world's biggest Manchester United fan,” Solskjaer said Wednesday. “But if they come to the door, there are not many who say no to that.”

Fjelde recalls Haaland making his senior debut at age 15 for Bryne, a small town in southwest Norway, in May 2016. Haaland cut a tall but slight figure - “he was only bones,” Fjelde said - but had uncanny movement for a player so young and was not overawed in the locker room alongside experienced players double his age.

“Most youngsters don't do the kind of runs he did when he was 15 or 16,” Fjelde said in a phone interview.

When Haaland first started playing soccer, said Fjelde, who also coaches the Under-15 team at Bryne, youth coaches took him out of training sessions and had to reduce his workload because he was growing so quickly and they were afraid he'd get injured.

Haaland has always regarded soccer as a bit of fun and still returns to Bryne, where his parents live, for kickabouts with his friends in the local indoor hall.

Fjelde, who still keeps in touch with Haaland and met up with him this summer in Norway, says the teenager is the biggest thing to come out of Norway since Martin Odegaard, who left boyhood Norwegian side Stromsgodset at age 16 to move to Real Madrid in 2015 but has never established himself at the Spanish giant.

Haaland is taking a different route to the top by moving to Salzburg instead of one of Europe's more high-profile teams.

“Maybe the step was too big for Martin at the time. It's different with Erling,” Fjelde said. “He is very down to earth. He has got his feet on the ground.”

Given what happened on his Champions League debut, which Haaland said gave him “a feeling in my body I never had before,” he will be under intense scrutiny for Salzburg's next group game - at Anfield against European champion Liverpool on Oct. 2.

Alf-Inge Haaland scored there for Leeds in the Premier League in 1997 and, at the current rate, his son could easily match that achievement.

Expect him to star in English football's most storied stadiums for years to come.