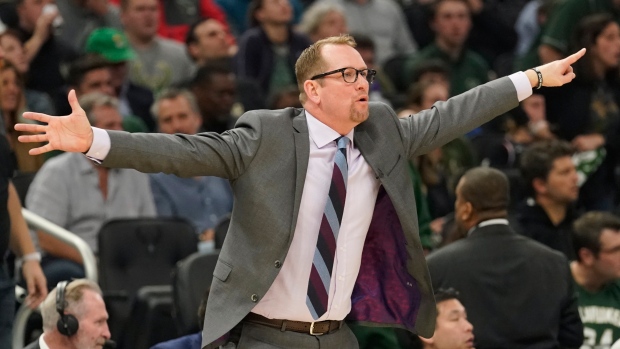 Toronto Raptors head coach Nick Nurse reacts during the first half of Game 5 of the NBA Eastern Conference basketball playoff finals against the Milwaukee Bucks Thursday, May 23, 2019, in Milwaukee. (AP Photo/Morry Gash)

A source confirmed a media report to The Canadian Press on Sunday that said Nurse would serve as Canada's head coach for the World Cup tournament, which begins August in China. The source spoke on condition of anonymity because Canada Basketball had not announced the hiring.

The World Cup is the main qualifier for the 2020 Toyko Olympics and Nurse would also coach Canada at the Summer Games if the team qualifies.

The media report first surfaced Sunday afternoon, hours after Nurse led the Raptors to their first Eastern Conference championship in franchise history on Saturday night. The Raptors will play the defending champion Golden State Warriors in the NBA Finals beginning Thursday in Toronto.

Canada Basketball had been searching for a head coach for its senior men's team for months.

Long-term head coach Jay Triano withdrew his name from the ongoing search for "personal reasons" in March. Canada Basketball's CEO Glen Grunwald and general manager of the men's program Rowan Barrett said at that time that they expected to have a coach in place by the end of the month.

Both Grunwald and Barrett replied "no comment" when asked by The Canadian Press about Nurse's hiring.

Nurse is in his first season as head coach of Toronto's NBA franchise. The former Raptors assistant coach was promoted after the team fired Dwane Casey at the end of the 2017-18 season.

The Raptors finished second in the Eastern Conference this season at 58-24, two wins less than the league-best Milwaukee Bucks.

Toronto topped the Orlando Magic, Philadelphia 76ers and Milwaukee this post-season to reach the NBA Finals. The Raptors beat the Bucks 100-94 in Game 6 to win the Eastern Conference final on Saturday night.

The World Cup begins Aug. 31 and runs until Sept. 15, a couple of weeks before NBA training camps open.

Expectations will be huge on a Canadian team that should boast the best collection of talent to ever suit up for Canada.

The top seven finishers of the tournament will punch their tickets to the 2020 Tokyo Olympics.

The Canadian men haven't played in the Olympics since Triano coached a squad led by Steve Nash to a 5-2 record and seventh-place finish in 2000 in Sydney.