Southern Comfort: All seven Canadian NHL teams playing in the U.S. on Saturday 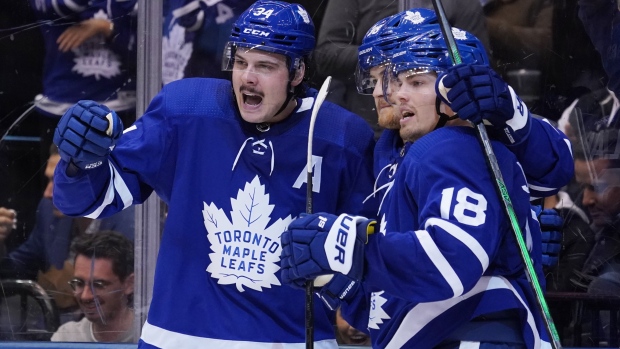 Hockey on a Saturday night is woven into Canada's cultural fabric.

Families gather in front of televisions, friends meet at bars, and fans make arena pilgrimages to cheer on their favourite teams.

But an NHL scheduling quirk this weekend will provide something rare - all seven Canadians franchises are in action Saturday, and not one of the games will be contested on home soil.

Canada's NHL teams have all played in the U.S. on the same date three times since the Winnipeg Jets were resurrected in 2011, but according to the league, it's never happened on a Saturday.

The Edmonton Oilers get things started south of the border when they visit the Pittsburgh Penguins at 1 p.m. ET, followed by an evening slate featuring the Ottawa Senators at the Boston Bruins, the Toronto Maple Leafs at the Philadelphia Flyers, the Calgary Flames at the Columbus Blue Jackets and the Montreal Canadiens at the Dallas Stars.

Then to wrap things up at 10 p.m. ET, the Winnipeg Jets are in Sin City to meet the Vegas Golden Knights, while the Vancouver Canucks tangle with the San Jose Sharks.

Canadian teams finished 0-5-2 the last time each played south of the 49th parallel the same day - a Friday - back in November 2018 as part of the U.S. Thanksgiving long weekend. Two years ago on the Wednesday before the same holiday, the clubs finished 3-1-3.

Things went a little better during the 2011-12 campaign when Edmonton, Toronto, Vancouver and Winnipeg all picked up victories.

Between 1992 and 1995 after Ottawa came into the league and before the Quebec Nordiques moved to Colorado, Canada's eight franchises never played in the U.S. on the same day. That was also the case the following season prior to the original Jets' move to Phoenix.