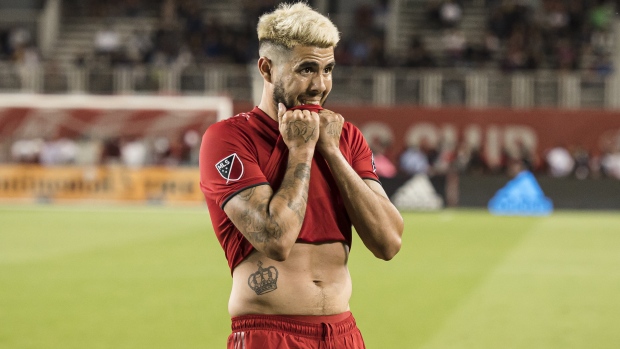 A surprise omission from Toronto FC's starting lineup on the weekend against Montreal, Alejandro Pozuelo is looking to reclaim his place as TFC's playmaker. Toronto FC midfielder Alejandro Pozuelo (10) reacts during second half MLS soccer action against the Orlando City in Toronto, on Saturday, Aug. 10, 2019. THE CANADIAN PRESS/Christopher Katsarov

TORONTO -- A surprise omission from Toronto FC's starting lineup against Montreal, Alejandro Pozuelo is looking to reclaim his place as TFC's playmaker this weekend on the road in New England.

"I hope so. I hope so," the Spanish attacking midfielder said Tuesday in English. "If not, I kill the coach."

Pozuelo, whose grasp of England has improved to the point where he can now crack a joke, broke into a wide grin as reporters guffawed.

If the Spaniard has been guilty of anything in recent games, it was likely trying to do too much. As former star striker Sebastian Giovinco did before him when he was unhappy at the ball distribution, Pozuelo has dropped deep in search of the ball at times.

Coach Greg Vanney just wants Pozuelo, who leads the team in assists (nine) and is second in goals (nine), to work his magic within the team structure. Toronto works best when it is zipping the ball along and having the Spaniard deep can be a waste of his talents.

Vanney also wants all his players to play their part on defence. For the attackers, that means a commitment to blocking passing lines and doing their bit to help regain possession.

Vanney, who brought Pozuelo on at halftime of Toronto's 2-1 win over the Impact, denied he was sending the Spaniard a message. But it's clear he was making a point.

"I had a conversation with him the day before -- just on some things that I wanted and I thought we needed from him," he said. "He's such a talented player. But there's also kind of a team concept that has helped us to be successful over the years."

"At times he has tried to do too much with the ball ... And then the timing of everything starts to get a little but convoluted for everybody else," he added.

With seven games remaining in the regular season, Toronto (10-10-7) doesn't have much time left to get everyone on the same page.

Vanney's team currently holds down the seventh and last playoff spot in the Eastern Conference. A win over sixth-place New England (10-9-8) on Saturday will help Toronto move up the standings.

With third-place New York City FC holding a 10-point lead over Toronto with a game in hand, TFC is likely now targeting fourth place, currently held by the New York Red Bulls who have a four-point edge over Toronto but have played one more game. Finishing fourth means home-field advantage in the first round of the playoffs.

Vanney has often pointed at turnovers in bad places as the cause of Toronto's problems this season. That can come from a lack of connection between players.

Toronto's inability to stock its roster until the summer transfer window did not help. The Montreal game marked the first league start together for new midfielders Nicolas Benezet and Erickson Gallardo.

Benezet, Gallardo and Pozuelo saw 15 minutes together in the second half against Montreal before Gallardo was substituted. Vanney says all three could start "if everyone wants to commit to it."

"Everyone has to fulfil their role on both sides of the ball and not just half of a role," he added.

Vanney liked what he saw in the second half against Montreal.

"I thought we had some really interesting actions," he said.

Vanney says his preferred starting 11 is actually more of a 13 or 14.

"Depending on what it is tactically we might be looking for in that game or in that moment, I think we have options," said Vanney. "But I'm trying to work us towards a group that I think will probably be our primary group."

Midfielders Jonathan Osorio (15 starts this season) and Nick DeLeon (21 starts) and defender-midfielder Richie Laryea (13 starts) are all key pieces of the puzzle.

Vanney says Pozuelo, who had been told he would come on in the second half against the Impact, reacted to his brief bench role last weekend with professionalism. The Spaniard said he'll do what the team needs, although he made it clear he's here to play.