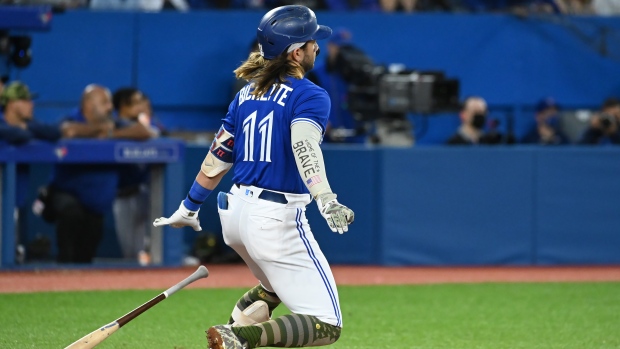 Toronto Blue Jays' Bo Bichette watches his RBI double, scoring George Springer, not shown, in the fifth inning of an Interleague League baseball game against the Cincinnati Reds in Toronto on Friday, May 20, 2022. THE CANADIAN PRESS/Jon Blacker

TORONTO - George Springer and Bo Bichette each drove in a run as the Toronto Blue Jays held on for a 2-1 win over the Cincinnati Reds on Friday.

Santiago Espinal stretched his career-best hit streak to 13 games for Toronto (21-18), but Vladimir Guerrero Jr., saw his end at 15.

Hyun Jin Ryu (1-0) gave up six hits and struck out three over six innings of scoreless work to lower his earned-run average from 9.00 to 6.00.

Ryan Borucki, Adam Cimber, Yimi Garcia and Jordan Romano came out of the bullpen for the Blue Jays.

Romano, from Markham, Ont., earned his 13th save of the season.

Matt Reynolds had an RBI single for Cincinnati (11-27).

Reds first baseman Joey Votto, who grew up in Toronto's west end, got a warm ovation from the 29,300 in attendance when he led off the second inning. He returned to Cincinnati's lineup in time for Friday's game after spending more than two weeks on the COVID-19 injured list.

Espinal was moved up to fifth in the Blue Jays' batting order by manager Charlie Montoyo for the game. Montoyo had said it was a credit to Espinal's consistent production during his hit streak.

Espinal rewarded Montoyo's faith in the fourth inning with an infield hit to Castillo, which the Toronto second baseman legged out for a single.

Springer broke the scoreless tie in the fifth inning, stroking a single past a diving Reynolds at second base. The basehit scored Bradley Zimmer, who had doubled in the previous at-bat.

Bichette followed that up with a double down the left-field line, bringing Springer home from first for a 2-0 Toronto lead.

The Reds answered back in the seventh, putting runners on the corners. Reynolds came to the plate with two out, putting a single just over a jumping Espinal's head to score Mike Moustakas.

Cimber was on the mound for the play but the run was charged to Borucki, who had put Moustakas on base when he hit him with a pitch to start the inning.

Romano came on in the ninth to close out the game, his first appearance since May 14 as he overcame a gastrointestinal infection. He induced two groundouts and a pop fly to earn the save.

MAYZA NEARS RETURN - Left-handed reliever Tim Mayza will throw on either Sunday or Monday as he works toward a return to Toronto's bullpen. He was placed on the 15-day injured list on May 16 retroactive to May 15 with forearm inflammation.

RATED R FOR RESTRICTED - Four Reds players were put on the Cincinnati's restricted list on Friday due to their COVID-19 vaccination status. Former Blue Jays infielder Brandon Drury, outfielder Albert Almora, as well as pitchers Joel Kuhnel and Tyler Mahle will all miss the series in Toronto.

NEXT UP - Alek Manoah will take his 4-1 record to the mound for the Blue Jays in Saturday's matinee against Cincinnati. The Reds counter with Hunter Greene (1-6).

This report by The Canadian Press was first published May 20, 2022.