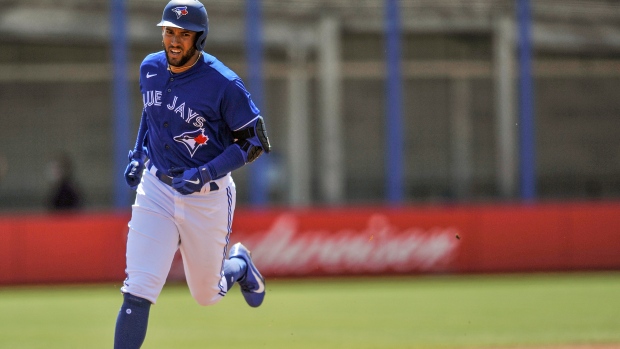 DUNEDIN, Fla. - George Springer was set to make his anticipated Toronto Blue Jays debut Wednesday in the finale of a two-game series with the Washington Nationals.

Springer was listed as the Blue Jays' designated hitter at the leadoff spot in the team's pre-game lineup.

His first game with his new team took a while to come together after Springer suffered some injury setbacks to start the season.

“I just wanted to make sure that I could trust myself, to know that I could go out there and I could do the things that I need to do help this team win,” Springer told reporters before the game.

Springer said the decision to slot him in as DH was probably made with the idea of easing him back into game shape, but he said he is looking forward to returning to the outfield when he's ready.

“I haven't played a game in a long time, but it's all good,” Springer said.

Springer, the 2017 World Series MVP while with Houston, signed a team-record US$150 million, six-year deal with the Blue Jays this off-season. However, his anticipated debut has been delayed by injuries.

The outfielder suffered a strained oblique in spring training, and then a right quadriceps strain when he was about to return from his first ailment.

“I felt great with my oblique and then this quad thing happened, and that was upsetting to say the least,” Springer said.

Toronto entered the game with an 11-11 record and was looking to sweep the series with the Nationals after posting a 9-5 win Tuesday behind a three-homer, seven-RBI performance from Vladimir Guerrero Jr.

“The way he's been swinging the bat all year, I think he's been in a much better spot in his own mind,” Springer said of Guerrero, who has been impressive so far in 2021 after a disappointing sophomore campaign.

“He knows what he needs to do right now, and it's been fun to watch.”

The Blue Jays also announced that left-hander Hyun Jin Ryu has been placed on the 10-day injured list with a right glute strain, retroactive to Tuesday. Ryu is 1-2 with a 2.60 earned-run average this season.

This report by The Canadian Press was first published April 28, 2021.