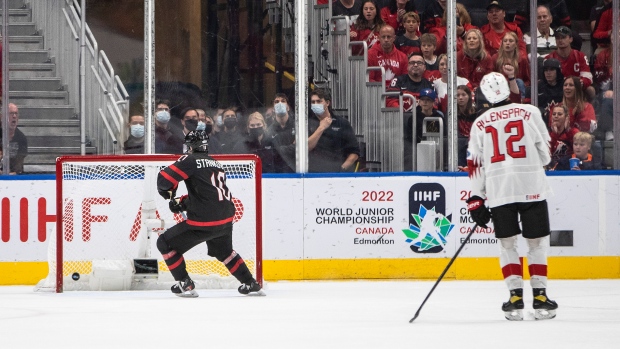 EDMONTON - Logan Stankoven had two goals and an assist Wednesday as Canada posted a 6-3 quarterfinal victory over Switzerland at the world junior hockey championship.

Tyson Foerster also scored and contributed two helpers, while Jack Thompson, Nathan Gaucher and Will Cuylle all added goals for Canada (5-0-0) and Ronan Seeley notched a pair of assists.

Dylan Garand made 22 saves for Canada, which outshot the Swiss 41-25.

Switzerland's Noah Patenaude allowed four goals on nine shots before being replaced by Kevin Pasche midway through the first period. Pasche made 30 saves in relief.

The victory means Canada will play in Friday's semifinals, but the host nation will have to wait for the outcome of the final quarterfinal - a battle between the U.S. (4-0-0) and Czechia (1-2-1) - to learn its opponents.

Switzerland pulled Pasche with 3:15 to go in favour of an extra attacker but couldn't make up the two-goal deficit.

Instead, Stankoven scored into the empty net with 69 seconds left on the game clock.

Some sloppy play created trouble for Canada midway through the second period.

Trying to clear the puck from behind the net, Garand sent the puck to Donovan Sebrango along the boards and the defenceman sent the puck up ice.

Biasca picked off the pass and snapped a shot past the Canadian goalie to make it 5-3 at the 7:51 mark.

A pass from Olen Zellweger to Cuylle down low set up Canada's fifth goal. Cuylle sent a sharp-angle shot in off Pasche 4:30 into the second.

The Swiss cut their deficit to 4-2 with just 8.2 seconds left in the opening frame.

Joshua Fahrni sent Biasca the puck from below the goal line and the Halifax Mooseheads' forward blasted a shot in over Garand's shoulder.

Canada's fourth goal of the night from Gaucher 17:01 into the game.

Patenaude denied Canada's Elliot Desnoyers but the puck got caught under his pad and Gaucher poked it in for his first goal of the tournament.

Switzerland then opted to swap Pasche for Patenaude in net.

Stankoven gave Canada a 3-1 cushion with a breakaway 14:32 into the first.

The Dallas Stars prospect picked off a pass at the Swiss bench and sprinted into the offensive zone alone. His initial shot ricocheted off the crossbar, so Stankoven collected the rebound and backhanded it into the open net for good measure.

Seeley's sneaky pass across the slot helped Canada re-take the lead 12:31 into the first. Thompson collected the puck and fired a quick shot pass Patenaude to make it 2-1.

Switzerland's first goal of the night came 2:21 into the game when Brian Zanetti uncorked a rocket from inside the blue line and Knak tipped it in for the equalizer.

Canada opened scoring just 74 seconds earlier when Stankoven sent a crisp pass to Foerster in the faceoff circle and he blasted it in for his third goal of the tournament.

Isak Rosen got Sweden on the board 16:44 into the first period and Gustavs Ozolins buried the equalizer for Latvia at the end of the second.

Latvia's Martins Lavins was tossed from the game 89 seconds into the third for a check to the head, but his teammates killed a five-minute major penalty to keep the score at 1-1.

Andrae broke the deadlock 9:49 into the third with a long shot through traffic.

Four points from Roby Jarventie led Finland to a 5-2 victory over Germany in another quarterfinal Wednesday.

Jarventie's first goal at 14:48 of the first period gave Finland a 3-1 lead and ended up as the game winner.

After Germany's Bennet Rossmy scored his second goal of the game in the second period to make it 3-2, Jarventie restored Finland's lead 6:22 into the third with Yannick Proske off for hooking.

Roni Hirvonen and Joel Maatta also scored power-play goals as Finland went 4-for-6 with the man advantage. Finland's power-play unit has been lethal throughout the tournament, firing at a 59 per cent clip (13-for-22).

Kasper Simontaival opened scoring for Finland with an even-strength goal 3:37 into the contest.

Canada took silver in the 2021 tournament, which was held at Edmonton's Rogers Place without fans due to COVID-19 restrictions.

POKE CHECKS: Both Canada and Switzerland went 0-for-1 on the power play... Canadian forward Ridly Greig headed to the locker room midway through the first period with an apparent shoulder injury and did not return... The groups for the 2023 world juniors have been announced. Canada is in Group A with Sweden, Czechia, Germany and Austria, and will play its preliminary round games in Halifax. The U.S., Finland, Switzerland, Slovakia and Latvia are in Group B and will open the tournament in Moncton.

This report by The Canadian Press was first published April 17, 2022.