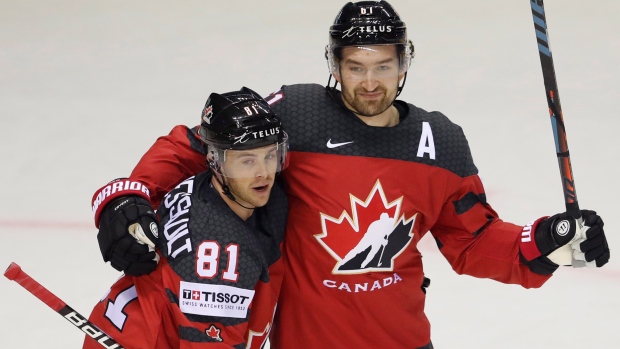 KOSICE, Slovakia -- Canada extended its winning streak to four games at the world hockey championship in blowout fashion on Saturday.

Mark Stone had a hat trick and Anthony Mantha scored twice in an 8-1 victory over Germany at the Steel Arena. Sam Reinhart, Thomas Chabot and Anthony Cirelli added singles.

Yasin Ehliz beat Matt Murray late in the second period for Germany's lone goal. Canada outshot Germany 30-7 over two periods -- including a 19-1 edge in the second stanza -- and 49-16 over the game.

Chabot opened the scoring with a power-play goal at 2:01 of the first period, firing a slapshot past Niklas Treutle from the top of the faceoff circle. Stone buried a rebound at 16:43 to make it a two-goal game.

At 6:02 of the second period, Dylan Strome found Stone with a nice pass from the side of the net and he buried it to make it 3-0. Ehliz cut into the lead at 18:01 but Stone answered 48 seconds later when he corralled a bouncing puck with his skate before chipping it over Treutle's shoulder.

Canada put the game away early in the third period with a flurry of three goals in a span of less than three minutes.

Mantha got things started at 3:01 and added a highlight-reel goal at 4:55. He intercepted a pass in the German zone, put his stick between his legs as he moved in on goal and flipped the puck inside the far post.

Reinhart scored at 5:28 and Cirelli capped the scoring at 13:10. Strome and Jonathan Marchessault had three assists apiece.

Germany returns to action Sunday against the United States while Canada will next play Denmark on Monday. Canada concludes the preliminary round Tuesday against the Americans.

The top four teams in each group advance to quarterfinals. The final is May 26.

Canada has earned 26 gold medals over the 82-year history of the tournament. Its most recent title came in 2016.