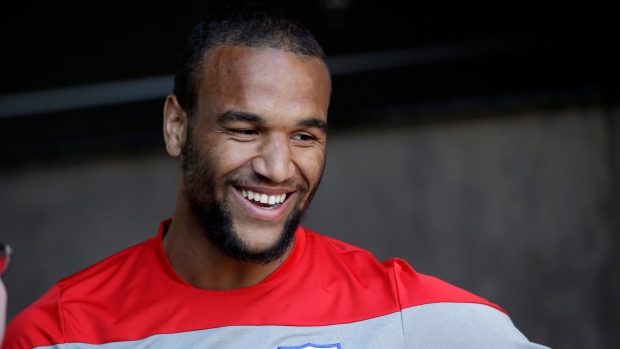 In this May 21, 2014 file photo, United States soccer player Terrence Boyd smiles as he answers questions during a training session in Stanford, Calif. Boyd, a German-American, was cut from the U.S. team roster in late May. (AP Photo/Marcio Jose Sanchez, File)

TORONTO -- With Sebastian Giovinco now picking up a paycheque eight time zones away and Jozy Altidore working his way back to match fitness after ankle surgery, Toronto FC fans are about to get a dose of Terrence Boyd.

It should be fun. The physical Boyd is a larger-than-life character who promises to cause some havoc on the football field.

But, after reading some of his own press recently, the German-born American striker offered up a caveat.

"First of all, I'm not Giovinco. I'm not capable of what he can do," Boyd said Friday with a chuckle. "I'm a guy who just throws himself into every tackle. I just try to sacrifice myself for the team."

Coach Greg Vanney calls Boyd a big physical forward "who likes to get a piece of defenders."

"I think he will drive centre backs crazy ... He's just a handful to deal with," he added.

And Vanney says with each game in pre-season, Boyd became more connected to his new team.

After flying back from California on Wednesday and a day off Thursday, the Toronto players had a light workout indoors Friday.

The games get real next week.

Toronto leaves Sunday for Panama, where it will face Club Atletico Independiente on Tuesday in a round-of-16 Scotiabank CONCACAF Champions League game. The return leg is Feb. 26 at BMO Field. TFC kicks off the MLS regular season March 2 in Philadelphia.

Vanney says Altidore may be available for a few minutes in the Champions League return leg or MLS season opener. And reinforcements are expected although they may be more angled to the role of provider.

The club has been linked to KRC Genk playmaker Alejandro Pozuelo, a 27-year Spaniard, as a possible designated player target. Argentine striker Jonathan (Jony) Menendez, a 24-year-old currently with Independiente of Argentina, also has been linked to a loan move.

Looking to create more width to his offence and to make Altidore the focal point of the attack with Giovinco gone, Vanney has used a 4-3-3 formation in pre-season with a centre forward flanked by wingers.

Boyd can serve as understudy in that role, stepping up as needed to keep Altidore fresh during another busy season with action on three fronts -- MLS, the Champions League and Canadian Championship.

Vanney says while the two could play together, he doesn't envision "playing them a ton together."

"I don't think they're extraordinarily complementary but I do think that they could a handful for any two centre backs who had to deal with them."

Boyd was born in Bremen, Germany, to a German mother and U.S. father, a soldier who was stationed there. Apart from one year in the U.S., he grew up in Germany.

He was out of contract after spending the last three seasons with SV Darmstadt 98 in the German second tier. He had five goals and two assists in 44 appearances there.

Boyd began his career with Hertha BSC's reserve squad in 2009. Two years later he signed with Borussia Dortmund, spending one season with its reserve side.

Ahead of the 2012 season, Boyd signed with Austrian club Rapid Vienna where he flourished. He made 80 appearances in three seasons, scoring 37 goals and adding 11 assists in all competitions. He was sold to RB Leipzig in the summer of 2014 before joining Darmstadt.

He has won 14 caps for the U.S., appearing most recently as a substitute in an October 2016 friendly against New Zealand.

Away from the soccer field, Boyd lives in the Frankfurt area with his girlfriend and daughter and co-owns a cafe called Boyd's in Mannheim.

Asked how it's doing, he laughed and replied: "Not well," blaming the winter. He expects business to pick up in the summer.

NOTES: Toronto is taking its chef on the road for the game in Panama ... Scottish-born midfielder Adam Wilson, Toronto's second-round draft pick last month, has left the club, looking to pursue other opportunities rather than join TFC 2 ... Vanney says 19-year-old winger Jacob Shaffelburg of Port Williams, N.S., has a chance to make the first club after impressing in pre-season ... Veteran defender Drew Moor, limited to just eight regular-season game last season, has been dealing with a minor hamstring issue.