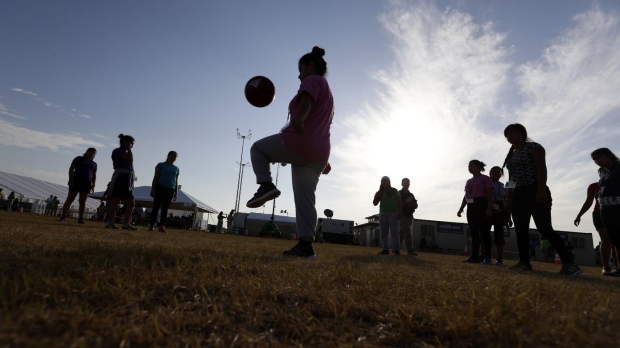 Participation rates of girls in Canadian sport have returned to pre-pandemic levels, according to a recent study, despite fears that one in four would not return post-COVID. THE CANADIAN PRESS/AP/Eric Gay

Participation rates of girls in Canadian sport have returned to pre-pandemic levels, according to a recent study, despite fears that one in four would not return post-COVID.

The bad news is those numbers were bleak to begin with, specifically in the teenage years when participation drops off, and among girls with intersecting identities such as Black, LGBTQ, Indigenous and those from lower income homes.

"The fact that participation rates have effectively returned to the pre-pandemic levels is really a positive story," said Allison Sandmeyer-Graves, the CEO of Canadian Women and Sports. "And we don't always have lots to celebrate when looking at the big national data on women in sport. I think this has to be seen as a victory … it also just shows that girls and their parents value sport, and girls want to play.

"Of course, we're not satisfied with the status quo."

What has changed, based on The Rally Report's national survey findings from 4,500 Canadian girls and women and more than 350 sport leaders, is that Canadian girls want a better sport system than the pre-pandemic one.

"It was so interesting to hear parents say that quality is a barrier," said Sandmeyer-Graves. "Almost half of them said that. And 75 per cent of girls want sport leaders to have more training in sport. They're like, 'Please, please, we need more from you to meet our needs and interests.'"

The study indicated that after losing access to sport during the pandemic's public health restrictions, girls and their parents are more aware of the benefits of sport, with more than 90 per cent of Canadian girls surveyed saying they believe that sport benefits their physical and mental health.

But participation rates continue to fall in adolescence. Half of Canadian girls aged 13 to18 in Canada are not participating in sport.

#RallyReport2022 is here and the message couldn't be clearer: our current sport system is failing to provide girls and women with access to safe, quality sport. Learn more and download the full report here. https://t.co/3nJEuyQY7U@CTJumpstart @WomenandSportCA pic.twitter.com/QQCei6DuP2

One in three Canadian girls report that coaches and organizations aren't addressing important safety issues. Almost half — 46 per cent — of parents report low-quality programming as a barrier to the ongoing participation in sport of their daughters aged six to 12. And less than half of coaches receive training on topics related to keeping girls in sport, including gender equity, body image, and mental health.

Sandmeyer-Graves noted that Canadian Women and Sport was mindful in acknowledging that good work being done.

"We absolutely see the many, many, many people in the sport system across Canada who are working so hard to make it better for girls. And I would not want them to feel discouraged by this report," she said. "And so really wanting to let them know that, as an organization, we see them, we see the effort that they're putting in, we know that they're making a difference.

"Let's get more people on board with putting in the effort and making the commitments that are really going to create a support system that is truly equitable, truly safe, truly inclusive."

The Rally Report, the third of is kind, was conducted by Leger Marketing on behalf of Canadian Women and Sport and in partnership with Canadian Tire jump-start Charities.