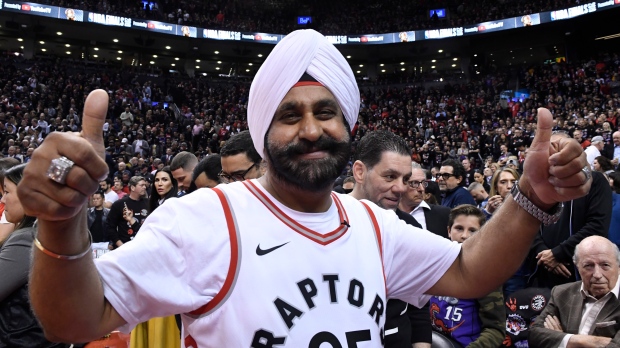 TORONTO - Friday night's Toronto Raptors game was notable for who wasn't in attendance.

It's the first home games he's missed since the Toronto franchise joined the NBA in 1995.

Bhatia posted the news on his Instagram account, telling Raptors fans: “I have been there for you and our team since day 1. Tonight I need you to help me.”

Bhatia said he's following a Toronto Public Health request that everyone in attendance at the Giants of Africa event isolate, calling it an “incredible event that followed all protocols,” and that he wasn't experiencing symptoms.

“My heart is breaking right now and all 19,800 of you in the arena are the only ones that can help,” Bhatia wrote. “I need two things from you. 1) cheer as loud as you can for our team! I will be from home yelling and screaming as well!

2) take good care of my friend Kal Penn. I want you all to show him why this is the best fanbase in the league and give him a lot of love tonight.“

Penn, an actor who will play the part of Bhatia in an upcoming movie about the mega-fan, sat in Bhatia's seat along the baseline.

The Raptors cancelled practice on Thursday in “an abudance of caution” after Ujiri's positive test result.