Talks between women's team, US Soccer end without resolution 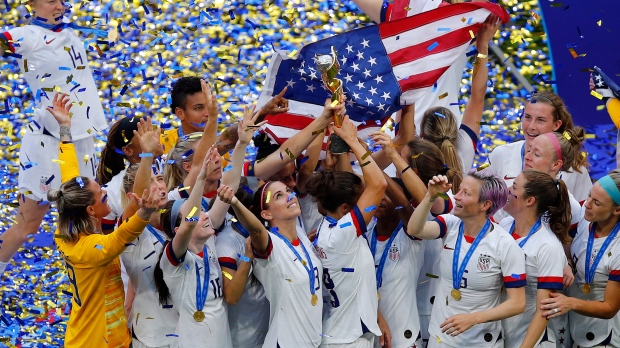 Players for the World Cup champion women's national team say mediation talks with the U.S. Soccer Federation in their dispute over equal pay are over. (FILE/AP Photo/Francois Mori)

Players for the World Cup champion women's national team say mediation talks with the U.S. Soccer Federation in their dispute over equal pay are over.

Molly Levinson, who represents the players in matters concerning the dispute, said in a statement Wednesday that the players look forward to a jury trial.

“We entered this week's mediation with representatives of USSF full of hope,” Levinson said. “Today we must conclude these meetings sorely disappointed in the federation's determination to perpetuate fundamentally discriminatory workplace conditions and behaviour.”

U.S. Soccer did not immediately respond to a request for comment on Wednesday afternoon.

The players sued the federation in March, charging institutionalized gender discrimination that includes inequitable compensation when compared with their counterparts on the men's national team. The USSF countered that pay and benefits for members of the men's and women's teams, bargained by separate unions, can't be compared and said there was no basis for allegations of illegal conduct.

The two sides agreed to mediate the matter once the Women's World Cup in France was over. The United States beat the Netherlands to win the title last month, and afterward fans in the crowd chanted “Equal Pay!”

The letter stated that the federation paid out $34.1 million in salary and game bonuses to the women between 2010 and 2018 as opposed to $26.4 million paid to the men. The total did not include the value of benefits received only by the women, like health care, Cordeiro wrote.

The players have disputed the figures, claiming they are misleading.

“It is clear that USSF, including its Board of Directors and President Carlos Cordeiro, fully intend to continue to compensate women players less than men. They will not succeed,” Levinson said Wednesday. “We want all of our fans, sponsors, peers around the world, and women everywhere to know we are undaunted and will eagerly look forward to a jury trial.”