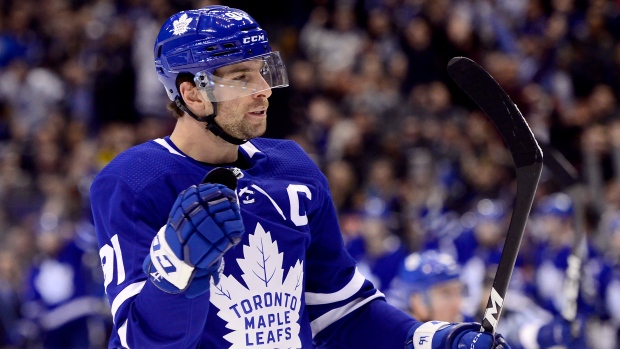 TORONTO - John Tavares scored his second goal of the night at 4:53 of overtime as the Toronto Maple Leafs escaped with a 5-4 victory against Anaheim Ducks on Friday.

Auston Matthews buried his 40th goal of the season to tie Alex Ovechkin for the NHL lead, while Jason Spezza and Andreas Johnsson provided the rest of the offence for Toronto (29-19-7). Matthews picked up three assists for a four-point night, while Mitch Marner added three of his own. Tavares also had an assist.

Jack Campbell made 26 saves in his first start for the Leafs.

Tavares scored his 22nd goal of the season at the lip of the crease with 6.2 seconds left on the clock.

Adam Henrique, with a goal and an assist, Nicolas Deslauriers, Max Jones and Derek Grant replied for Anaheim (22-26-7), which was playing its third game in four nights following Thursday's 3-2 overtime loss in Montreal.

Ryan Miller stopped 30 shots for the Ducks, who were forced to go with five defenceman for the third period and overtime after Erik Gudbranson left with an upper-body injury.

The Leafs led 3-1 after 40 minutes, but like Monday's 5-3 home loss to the Florida Panthers, they blew an identical two-goal advantage on home ice as Terry, shorthanded, and Henrique, on a power play, scored just over four minutes apart to level things.

Spezza got Toronto back in front 4-3 when he raced down the right side, faked a shot on Miller, and scored his ninth upstairs from a tight angle with 3:28 left in regulation.

But Grant scored his 13th with 57 seconds left on the clock off a scramble in Campbell's crease to knot it up again and force OT.

Campbell and bruising forward Kyle Clifford both made their debuts for the Leafs following Wednesday's trade with the Los Angeles Kings that sent winger Trevor Moore and two draft picks the other way.

With No. 1 goalie Frederik Andersen still out nursing a neck injury suffered Monday and backup Michael Hutchinson unable to get the job done in a 5-3 setback at the New York Rangers two nights later, Toronto general manager Kyle Dubas pulled the trigger with his team sitting below the playoff cutline following back-to-back defeats.

Andersen won't make the trip to Montreal for Saturday's tilt with the Canadiens, but could return next week after consecutive days on the ice.

Tied 1-1 after the first period, Tavares scored his 21st, and third in as many games, on a power play 3:38 into the second off a pass from Matthews.

Toronto started to impose its will from there, with Marner nearly connecting after an incredible dangle around Jakob Silfverberg before Matthews came close on two chances.

After the Leafs killed off a Tavares penalty midway through the second, the captain found Matthews off the rush, and he buried his 40th on a bullet one-timer at 13:18. The 22-year-old equalled the career-high 40 goals he scored in his rookie season back in 2016-17, and tied the 34-year-old Oveckhin's 40 for the overall lead in 2019-20.

Expected to add some much-needed grit and sandpaper to Toronto's talent-loaded roster, the six-foot-two, 211-pound Clifford mixed it up with Ducks captain Ryan Getzlaf - the two are well acquainted from battles between Anaheim and L.A. - during a scrum near Campbell's net.

He got a rousing ovation from the 19,077 on hand at Scotiabank Arena as he skated to the penalty box.

Campbell didn't have a lot to do through two periods as the Leafs kept things tight in front of their new goalie, but had to be sharp on a couple of Cam Fowler chances late in the second.

The 28-year-old Campbell, who only became a full-time NHLer as the Kings' backup last season, continued his sharp play in the third as Anaheim started to push.

Matthews nearly scored his 41st at the other end, but his shot rattled the post behind Miller. The Ducks netminder then denied Pierre Engvall on a breakaway to keep Anaheim within striking distance.

Toronto got a power play looking to make it 4-1, but Jones took advantage of a turnover and beat Campbell upstairs for his seventh at 8:34.

Anaheim tied it with 7:13 left in regulation when Henrique scored his 18th when he batted one out of mid-air on a power play after Clifford went off for holding the stick before Spezza rescued the Leafs late.

Campbell got a nice hand from the crowd on his first save in blue and white early in the opening period, but had his post to thank a few minutes when Troy Terry found iron.

Toronto nudged in front at 4:36 when Johnsson finished off a tick-tac-toe passing play with Marner and Matthews for his eighth. The goal was also the winger's second in 10 games after missing 15 with a leg injury.

Deslauriers tied it exactly six minutes later when he took a cross-ice pass from Cam Fowler and one-timed a shot past Campbell.

The Leafs had a golden opportunity to retake the lead late in the period when Jones went off for high-sticking and Grant fired a clearing attempt from his own zone over Campbell's net at the other end of the rink. But Toronto showed next to no urgency over the next 1:42, managing just one shot with the two-man advantage.