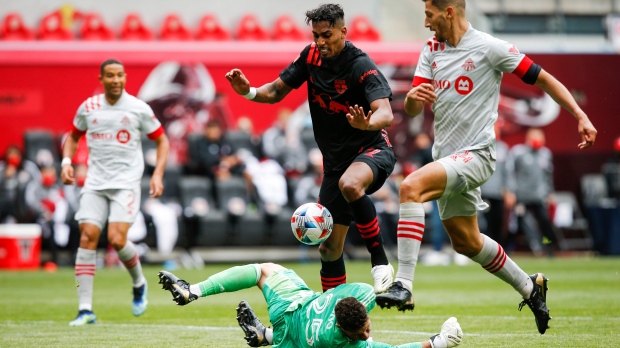 HARRISON, N.J. - Seven games into the season and Toronto FC has won just once in all competitions (1-4-2), with defending MLS champion Columbus Crew SC up next.

A 2-0 defeat Saturday at the New York Red Bulls saw Toronto (0-2-1 in MLS play) make a promising start, giving the Red Bulls a taste of their own medicine with an aggressive press.

But TFC got nothing out of it, with New York (2-2-0) taking the lead in the 32nd minute on a Frankie Ayama goal after teenager Caden Clark picked Mark Delgado's pocket. The 17-year-old Clark doubled the lead in the 69th minute when the Red Bulls carved open the TFC defence without much opposition.

Toronto coach Chris Armas is missing some key pieces, meaning the ones he has have to perform. That's not happening, with mistakes costing the team.

“In a league where the margins are thin, we have to be at our best. We have to carry our weight. We have to be up for it every single time, no matter what - altitude, heat, short rest, whatever that is,” said Armas.

“There's a feeling on the inside that we're giving away some games.”

Fragility at set pieces and giveaways have cost his team.

“Right now we have little situations we have to do better with - individually and ultimately collectively,” said Armas.

TFC, which finished second in the overall league standings in 2020, can take some solace in that it has yet to start its best 11 due to injury. An outbreak of COVID-19 early in the pre-season, an enforced move south of the border again, elite Mexican opposition in the Scotiabank CONCACAF Champions League and playing seven games in seven different venues hasn't helped.

Armas is a no excuses type of guy, however.

“The main message is that in a time when there's a lot to make excuses about, that it's not the time,” he said. “And that from coaches to players, in moments like this you have to take a hard look and say 'Can I do better? In what ways?”'

The answer is a resounding yes.

Saturday's game was a matchup of hard-pressing sides, looking to force the opposition into mistakes and then strike quickly after winning the ball back.

The Red Bulls went ahead in the 32nd minute after Clark stole the ball from Delgado and headed towards the Toronto goal. He found Fabio and the Brazilian forward laid it back for Amaya, whose low shot through traffic beat Alex Bono from the edge of the box.

It was Amaya's first for the club since arriving from FC Cincinnati in April.

Clark made it 2-0 in the 69th, poking the ball in after Fabio beat Bono to Dru Yearwood's through ball. The teenager has scored in three of New York's four matches this season and upped his career MLS goals total to five in just 11 games.

One of those goals was a spectacular strike against Toronto last October, lifting the Red Bulls to a 1-1 tie. The goal came in his second career game - four days after opening his account in his debut just hours after signing a first-team contract.

Newly signed Venezuelan international Yeferson Soteldo, a US$6-million signing, made his TFC debut off the bench in the 56th minute. The 23-year-old, wearing No. 30, tucked in behind Ayo Akinola but had few chances to showcase his skills.

Akinola, still finding his feet after a lengthy absence, started up front, got little service and had a quiet afternoon.

The Red Bulls outshot Toronto 11-5 (3-1 on target) in a game lacking much entertainment value other than Clark, who is a bundle of speed and energy. Perhaps of more concern, Toronto completed just 65 per cent of its passes, down from 76.9 per cent in the loss to Cruz Azul.

The Red Bulls downed Chicago 2-0 last time out, after opening losses to Sporting Kansas City and the Los Angeles Galaxy.

Saturday's game marked a return to Red Bull Arena for Armas, Toronto GM Ali Curtis, and assistant coach Ewan Sharp, who all worked for the Red Bulls. Curtis spent six years there, including 2 1/2 as head coach.

A limited number of fans were in the seats Saturday.

Armas made three changes to the lineup that lost to Cruz Azul on Tuesday with Brazil's Auro and 18-year-olds Ralph Priso and Jayden Nelson coming in for Justin Morrow, Jacob Shaffelburg and Jonathan Osorio.

It was the third career start for both Priso and Nelson. Osorio, who had an icepack on his thigh after leaving the Cruz Azul game at halftime, did not dress.

This report by The Canadian Press was first published May 8, 2021.