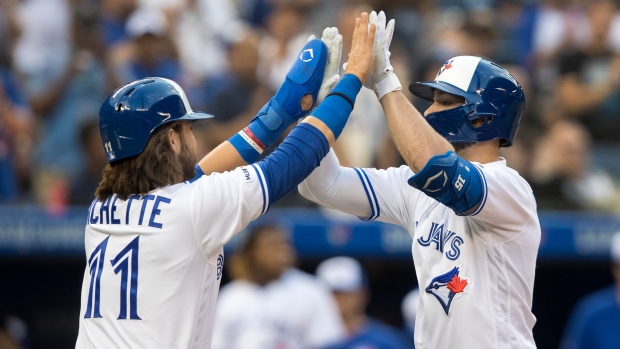 Randal Grichuk and Danny Jansen also hit home runs for the Blue Jays (48-72), who evened the four-game series at 1-1..

Reid-Foley (2-2) collected the win after allowing just one run on five hits while striking out five batters.

The Yankees (76-40) had their season-high winning streak snapped at nine games.

Former Blue Jay J.A. Happ (9-7) struggled with his control on the mound for the Yankees. He allowed six runs on four hits, walked three batters and allowed three home runs.

Grichuk opened the scoring in the first inning when he sent a 1-1 fastball from Happ over the left-field wall for a two-run homer, giving the Blue Jays a 2-0 lead.

The Jays added to their lead in the second inning. Hernandez hit his first homer of the game, a full-count solo shot for a 3-0 lead.

In the third, Yankees outfielder Brett Gardner was ejected from the game after arguing balls and strikes from the dugout during Cameron Maybin's at-bat. After he was tossed, Gardner had to be restrained by Yankees manager Aaron Boone as he made his way to umpire Chris Segal. On the next at-bat, Mike Tauchman hit a solo homer to cut Toronto's lead to 3-1.

In the bottom half of the third, Toronto kept its inning alive when Brandon Drury was nearly out while trying to go to third base on a wild pitch.

That mistake would have ended the threat, but Toronto challenged the umpire's ruling that Drury was out. The call was overturned and the inning continued. Jansen was the benefactor as he hit a three-run homer over the centre-field wall to give Toronto a 6-1 lead.

In the fifth inning, the Yankees loaded the bases with two out. Didi Gregorius hit a hard liner up the middle, but Bo Bichette made a sprawling catch to end the inning and save what would have at least two runs for New York.

In the eighth inning, would hit his second home run of the game, a two-run shot, to give the Blue Jays an 8-2 lead.

Notes: Bichette went 0-4 and had his franchise-record 11-game hitting streak to start a big-league career come to an end. ... Starting pitcher Ryan Borucki's season is officially over. He underwent surgery to remove bone spurs in his elbow. ... Before the game, Blue Jays manager Charlie Montoyo said that Lourdes Gurriel Jr., would be placed on the 10-day injured list on Saturday with a quad strain. Gurriel was injured in the ninth inning of Toronto's 12-6 loss to the Yankees while running to first base on Thursday. ... Announced attendance was 25,782 on Friday.