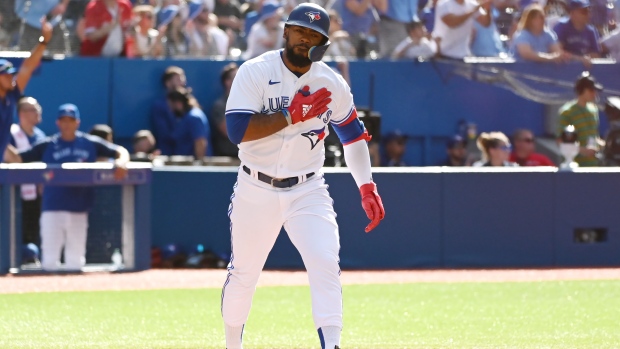 Bo Bichette had the 200th RBI of his career for Toronto (56-45) and Lourdes Gurriel Jr. also drove in a run.

Adam Cimber, Trevor Richards (3-0), Yimi Garcia and Jordan Romano came out of the Blue Jays, with Romano earning his 23rd save of the season.

Drew Hutchison allowed just two hits and three walks for one run over five innings with three strikeouts. Reliever Derek Law (0-1) took the loss after giving up four runs. Angel De Jesus, Jose Cisnero didn't give up any runs in their appearances.

Gurriel put the Blue Jays on the board early with a single to right field scoring Vladimir Guerrero Jr. in the first inning. Guerrero had gotten himself into scoring position by stealing second. It was the big first baseman's second stolen base on three attempts this season.

Interim Blue Jays manager John Schneider has encouraged his players - even huskier players like Guerrero - to be more aggressive on the basepaths since taking over from Charlie Montoyo on July 13. Both of Guerrero's stolen bases have come since the managerial change.

Stripling got into trouble in the fifth, giving up back-to-back singles to start the inning, bringing Schoop to the plate. A Stripling pitch bounced off the bottom of Schoop's bat and the Toronto starter fielded the ball, throwing it to third baseman Matt Chapman for a seeming forceout and then Chapman relayed it to first for what seemed to be a double play.

But the Tigers challenged the play and after video review officials ruled that Stripling's pitch had hit Schoop's hands, not the knob of his bat. That gave Schoop a free pass to first base and negated the out at third.

Clemens then hit a sacrifice fly that scored Eric Haase from third, ending Stripling's outing. Greene followed that up with his RBI double, scoring Robbie Grossman for a 2-1 Detroit lead.

Schoop tacked on another run in the next inning, with his single to right field giving Jeimer Candelario time to run home from second. Candelario had reached base after Cimber had hit him with a pitch.

Toronto rallied in the bottom of the sixth to re-take the lead.

Bichette hit a sacrifice fly with the bases loaded, scoring George Springer. That brought Hernandez to the plate and he wasted no time in sending a pitch to dead centre field for a three-run homer, scoring Guerrero and Gurriel for a 5-3 lead.

THORNTON UP - Right-handed pitcher Trent Thornton was recalled from triple-A Buffalo by the Blue Jays and was active for Saturday's game. Righty Max Castillo was optioned to Toronto's minor-league affiliate in western New York in a corresponding move.

CLEMENS RETURN - Clemens made his Rogers Centre debut for Detroit on Saturday. The son of pitching great Roger Clemens was an infant when his father won the Cy Young Award as the American League's best pitcher for the Blue Jays in 1997 and 1998.

UP NEXT - Jose Berrios (7-4) will take the mound for Toronto in its series finale against Detroit on Sunday afternoon. The Tigers will counter with Garrett Hill (1-2).

This report by The Canadian Press was first published July 30, 2022.