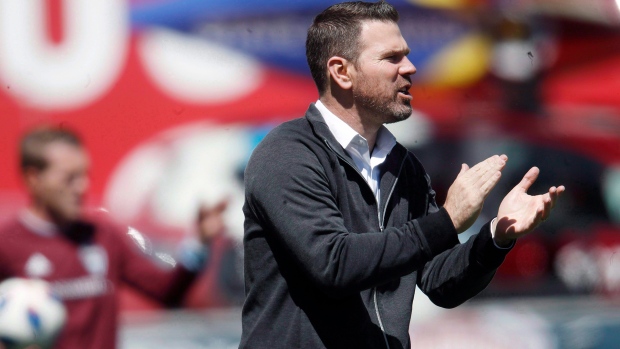 Toronto FC head coach Greg Vanney directs his team against the Colorado Rapids in the first half of an MLS soccer match in Commerce City, Colo., on April 14, 2018. The 9 a.m. kickoff is daunting enough. So is the 5:30 a.m. pre-game meal. Toronto FC gets one heck of an early start to the MLS is Back Tournament on Sunday when it faces D.C. United at ESPN's Wide World of Sports complex in the Orlando area. THE CANADIAN PRESS/AP, David Zalubowski

A morning that had promised to start and end early Sunday turned into a stressful all-day marathon for Toronto FC and D.C. United.

The teams were slated to kick off their MLS is Back Tournament at 9 a.m. ET at ESPN's Wide World of Sports Complex in the Orlando area. Minutes before the scheduled start, Major League Soccer called off the game - citing two problematic COVID-19 tests.

While D.C. United made it to the playing field, Toronto never left the league hotel.

“Both teams participated in another round of testing (Sunday) and all players from the two clubs tested negative,” the league said in a statement issued Sunday evening. “Based on those results, the game will be played (Monday) morning at 9 a.m. ET.

“The player who received an initial positive test and the player whose test was inconclusive will undergo additional testing and will not play in (Monday's) match.”

The league did not identify the players in question. Neither did Toronto FC, although GM Ali Curtis did say his player was asymptomatic.

The tournament, which marks the league's first action since it shut down March 12 due to the global pandemic, has already lost FC Dallas and Nashville SC due to a rash of positive COVID-19 tests.

Sunday was another day of drama and doubt in the pandemic sports world.

“These days nothing's really normal. If anything the normal is kind of uncertainty,” Curtis told a virtual conference call Sunday evening.

It marked the second delay for both Toronto and D.C. United. They were supposed to meet Friday night but the game was pushed back to Sunday due to Toronto's late arrival at the tournament because of the need for additional COVID-19 testing in the wake of a player reporting symptoms.

Players and staff were tested Saturday in advance of the game. Curtis said the team learned of the inconclusive test around midnight, prompting another test in the player's room that proved to be negative. The Toronto player has been isolated pending the result of another test.

The rest of the Toronto team produced negative results in the latest batch of testing.

Curtis, meanwhile, started his Sunday with a 6 a.m. Zoom call, the first of many.

With the game expected to start at 9 a.m. Monday, both teams faced another early morning wake-up call. Toronto's pre-game meal Sunday was scheduled for 5:30 a.m.

Toronto's second game against the Montreal Impact, originally scheduled for Wednesday, has now been pushed back to Thursday. And D.C. United's game against the New England Revolution will now be played on Friday instead of Thursday.

Wednesday's game between the Vancouver Whitecaps and San Jose Earthquakes will now start at 9 p.m. instead of 10:30 p.m.

After the threat of lightning delayed Atlanta's game against the New York Red Bulls on Saturday night, there were more delays and drama Sunday.

“We believe the tournament can still be conducted safely,” MLS deputy commissioner Mark Abbott told a virtual conference call Sunday morning. “And if at the point we determine it can't, obviously we would make a decision then.

“In the case of Dallas and Nashville, the decision was made that based on the extent of the positive tests in those teams (and) their ability to train, that the more prudent course was to withdraw them.

“But we had established a set of protocols that are working as they were designed, which is to identify players that have had positive tests for COVID-19, to remove and separate them from the team and isolate them. And to continue the process of testing the other players ... We view this (case) as the process working.”

Under league protocols, players who test positive are isolated while those who test negative “move forward.”

Abbott said because Toronto only arrived last Monday, the decision was made to await the results of tests conducted Sunday morning before playing the game.

Curtis said his team is still on task at the tournament.

“It's an important competition. A lot of people have put a lot of work and effort into (it) ... It's important that we represent the club and we represent our city as best as we can.”

It all added to an already stressful morning for the teams given the unusually early kickoff time - made to avoid the Florida heat. Both Toronto captain Michael Bradley and striker Jozy Altidore had criticized the 9 a.m. start, saying it was not conducive to good football.

D.C. goalkeeper Bill Hamid suggested it was an inconvenience to fans, too.

“To every DC United supporter, our families & friends, I'm sorry you woke up so early to see us play, to then have the match postponed AGAIN,” he tweeted. “Especially after so many people planned originally to watch the game which was meant to play on Friday! Have a beautiful Sunday regardless.”

Curtis said while Toronto had always planned to show up late for the game, to avoid the heat for as long as possible, the team was on a group Zoom call abut what was going on with the COVID-19 test when he received the call from the league that the game was off.

While all 24 remaining teams are staying in the same hotel, they are isolated from each other in the MLS tournament bubble. Players and other personnel are tested every other day.

“When you look at the data, if you strip out the outliers of Dallas and Nashville, I think the numbers are fairly favourable” he said. “And then when you're in the bubble you see some of the measures that are taken and that gives you confidence.”

But outside, the number of positive cases continues to climb.

On Sunday, Florida reported 15,300 new cases over the last 24 hours - a single-day record in the U.S. since the start of the pandemic.

There were some surprises in Toronto's planned starting 11 Sunday.

While it fielded the same back five as it had in its last league game March 7, there were four changes further forward. Bradley and Argentine newcomer Pablo Piatti, who both missed the opening two games of the season, were to return from injury.

Tsubasa Endoh and Ayo Akinola were also in the starting 11.

Altidore did not make the matchday 23. He was late joining the team after spending the lockdown at his Florida home and had to train on his own while fulfilling quarantine.

Canadian midfielder Jonathan Osorio was a surprise omission from the matchday 23.

Sunday evening's Sporting Kansas City against Minnesota United game went ahead despite confirmation Friday by Kansas City that one of its players had tested positive.