Three Canadians taken in first round of MLS SuperDraft 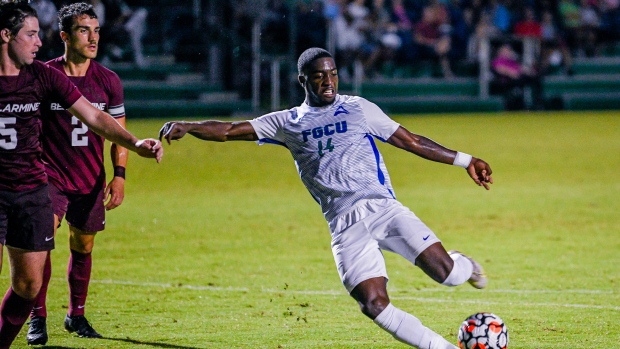 Canadians Tani Oluwaseyi, O'Vonte Mullings and Mo Omar went in the first round of the MLS SuperDraft on Tuesday.

Oluwaseyi, a forward from St. John's University, was taken 17th overall by Minnesota United while Mullings, a forward from Florida Gulf Coast University, went 20th to the New York Red Bulls and Omar, a defensive midfielder from Notre Dame, was selected 23rd by the Colorado Rapids.

Toronto FC traded away its third overall pick on Monday.

Kwizera, a native of the Democratic Republic of Congo who went to high school in Utah, played two seasons at USU Eastern in Price, Utah, before switching to Utah Valley. He had three goals and eight assists in 14 games last year.

Becher, a first team all-American and Atlantic 10 Conference Offensive Player of the Year, scored 21 goals and added 13 assists in 46 career games for Saint Louis University. He was the fourth member of the Billikens to go in the first round.

Oluwaseyi was the first Canadian taken with former Canadian international Mark Watson, Minnesota's technical director, calling out his name in the virtual draft.

“He's been a player we've targeted and known about for a while. He's very gifted athletically and he's got a ton of upside,” said Minnesota coach Adrian Heath.

The 21-year-old from Mississauga, Ont., has seen limited action since the 2019 season due to the pandemic and knee surgery. But in 2019 as a sophomore, Oluwaseyi became the first Red Storm player since 1996 to win Big East Offensive Player of the Year honours after scoring 11 goals and adding five assists. His 11 goals were the most by a St. John's player since 2003.

The six-foot-two 170 pounder underwent surgery after dislocating his left kneecap last June while playing for Manhattan SC in USL League Two. He returned to action in the fall, but pulled the plug after two games to give the knee a little more time.

The Red Bulls traded to get Mullings, sending US$75,000 in general allocation money and a second-round pick (43rd overall) to Seattle to get the Toronto native.

The first five picks of the virtual draft were all members of the Generation Adidas class - collegiate underclassmen signed by the league whose salaries will not count against their team's salary cap budget.

Recent Canadian Generation Adidas players include Tajon Buchanan (taken ninth in the 2019 draft) and Richie Laryea (seventh, 2016). Both have now left their MLS clubs for Europe with Buchanan at Belgium's Club Brugge and Laryea at England's Nottingham Forest.

Bender is the 50th Maryland player taken in the history of the MLS SuperDraft - and the third to go first overall following Maurice Edu (taken by Toronto FC in 2007) and Leo Cullen (1998).

The first-team all-American had seven goals and five assists in 18 games last season for the Terrapins.

FC Cincinnati, which gave up a league-worst 74 goals last season, used the second pick on Indiana junior goalkeeper Roman Celentano. The six-foot-three Hoosier is the first player in Big Ten history to win the conference's Goalkeeper of the Year award multiple times (2020-21 and 2021).

Toronto traded the pick Monday in a salary dump that sent veteran forward Dom Dwyer and the draft pick for $50,000 in general allocation money. Dallas promptly bought out Dwyer's contract and waived him.

Canadian Pat Onstad, the new GM of the Houston Dynamo, took Duke sophomore forward Thor Ulfarsson with the fourth pick. The native of Iceland was the 2021 ACC Offensive Player of the Year with 15 goals.

CF Montreal traded down in a three-way deal with the New York Red Bulls and Chicago Fire.

The trade saw Montreal drop to No. 15 from No. 11 while gaining $100,000 in general allocation money from the Red Bulls. New York then sent the 11th pick and $100,000 in GAM to Chicago, using the Fire's seventh overall pick to select six-foot-eight defender Matthew Nocita from the U.S. Naval Academy.

This report by The Canadian Press was first published Jan. 11, 2022