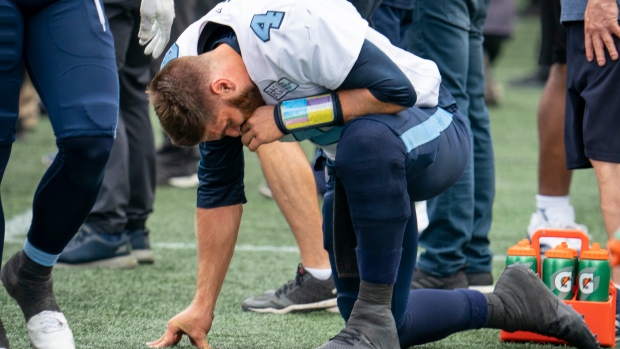 Toronto Argonauts quarterback McLeod Bethel-Thompson (4) kneels on the sidelines during the final minute of play during second half CFL football game action against the Hamilton Tiger-Cats in Hamilton, Ont. on Monday, Sept. 2, 2019. THE CANADIAN PRESS/Peter Power

HAMILTON - First Dane Evans and the Hamilton Tiger-Cats stopped beating themselves, then they continued their Labour Day domination of the Toronto Argonauts.

Evans completed 19-of-20 second-half passes for 268 yards and two TDs to rally the Ticats to an exciting 38-27 win over the Argos on Monday. Fourth-quarter touchdowns by Jackson Bennett and Bralon Addison anchored Hamilton's sixth straight Labour Day victory over Toronto, the longest win streak by either team in the historic showdown.

“We stopped beating ourselves,” Evans said regarding Hamilton's improved second-half play. “It's pro football . . . you've just to keep plugging away.

“You don't want to be cocky or anything but you've got to have confidence in yourself. I was just playing football like I was a kid in the back yard.”

Evans finished 31-of-37 passing - completing 19 straight attempts at one point - for 442 yards with his two TDs and two interceptions as Hamilton outscored Toronto 27-3 in the second half. The two first-half picks give Evans, who also had a 10-yard TD run, six over his last three starts.

Hamilton improved to 6-0 at home overall and hasn't lost on Labour Day to Toronto (1-9) at Tim Hortons Field since the facility opened in 2014.

The Ticats clinched the season series despite finishing with six turnovers (two interceptions, two fumbles and twice on downs) and having allowed seven sacks. But Hamilton still rolled up 590 offensive yards and had the ball for over 33 minutes.

Addison recorded 11 catches for 167 yards while Brandon Banks added nine receptions for 109 yards and a two-point convert. More importantly, the Ticats head into a bye week on a huge positive before road games against Calgary, Edmonton and Winnipeg.

“I'm just proud of the men, it was unbelievable,” said Ticats head coach Orlondo Steinauer. “The adversity they overcame . . . they did a great job.

“We stuck with things a little bit longer (offensively in second half). We were able to sustain some drives which opens up the playbook. It's hard (to do that) when you're two and out, two and out.”

Steinauer wouldn't comment on the ejection of Adeleke and Williams. The incident began with Hamilton linebacker Simoni Lawrence and Toronto running back James Wilder Jr. getting into it on an incompletion and quickly escalated as three separate flags were thrown before order was finally restored.

But Steinauer heaped lavish praise upon his starting quarterback.

“Do we want to eliminate turnovers? Absolutely. Are they part of our journey right now? Yes. But again, it's not what happens to you, it's what your response is and we came out with the win.”

Toronto not only suffered a third consecutive loss overall but also failed to score a rushing TD for a CFL-record 12th straight game dating back to last season.

“A tough loss,” said Walker. “We went out there and battled the first half, just couldn't get it done in the second half, I don't know what it was.

“We only scored three points in the second half and you're going to lose every time when you do that. We can play with any team in this league, it's just closing out the game and limiting our mistakes. It is what it is.”

It's a quick turnaround for Toronto, which visits the Ottawa Redblacks on Saturday.

Bethel-Thompson and Walker combined to stake Toronto to its 13-point half-time advantage. Walker caught Bethel-Thompson TD strikes of 96 and 24 yards and had five catches for 166 yards in the opening two quarters.