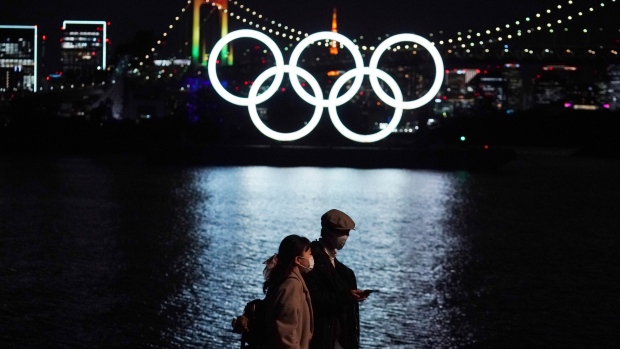 A man and a woman walk past near the Olympic rings floating in the water in the Odaiba section Tuesday, Dec. 1, 2020, in Tokyo. The Olympic Symbol was reinstalled after it was taken down for maintenance ahead of the postponed Tokyo 2020 Olympics. (AP Photo/Eugene Hoshiko)

TOKYO - The cost of the postponed Tokyo Olympics could reach about $2.8 billion, according to figures released Friday by the Tokyo organizing committee, the Tokyo city government and Japan's national government.

The numbers are in line with estimates that have been made in Japan since the Olympics were postponed eight months ago. They are now set to open on July 23, 2021.

About two-thirds of the added costs are being picked up by the two government entities, with the other one-third going to the privately funded organizing committee.

The operational cost for the delay is listed at 171 billion yen, or about $1.64 billion at the present exchange rate. The organizing committee and the Tokyo government share equally in covering the expenses. The national government will pick up a small portion.

The cost for coronavirus countermeasures is 96 billion yen (about $920 million). This is being covered solely by the governments.

Tokyo organizers also said they could add 27 billion yen (about $260 million) from a contingency fund to help cover added costs.

Tokyo costs are ballooning and could reinforce skepticism about holding the Olympics in the middle of a pandemic. Recent polls show the public is divided on the issue of the Olympics, and allowing fans from abroad to enter.

Prior to the postponement, Japan said the Olympics would cost $12.6 billion. But a government audit last year said it was likely twice that much. All but $5.6 billion is public money, before any delay costs.

Tokyo said the Olympics would cost $7.3 billion overall when it won the bid in 2013. And a University of Oxford study two months ago said the Tokyo Games are the most expensive Summer Olympics on record.