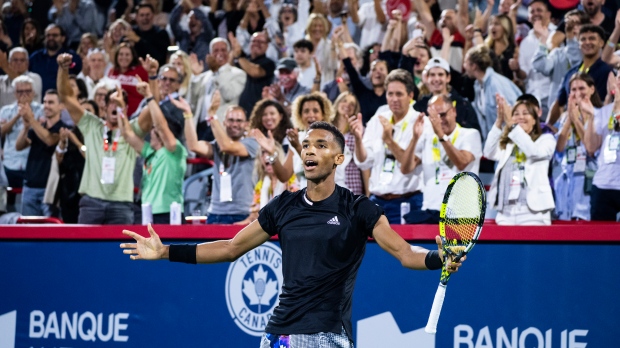 Canada's Felix Auger-Aliassime celebrates after winning the first set over Yoshihito Nishioka of Japan during second round of play at the National Bank Open tennis tournament Wednesday August 10, 2022 in Montreal. THE CANADIAN PRESS/Paul Chiasson

MONTREAL - The National Bank Open's defending champion is out. The second seed was eliminated too and the so-called Big Three didn't make the trip.

The draw was left wide open on Wednesday at IGA Stadium before some players had even played their opening matches.

Carlos Alcaraz was the first to go, falling in the early session to American Tommy Paul. World No. 1 and top seed Daniil Medvedev was next as he was dispatched by Australia's Nick Kyrgios.

In the evening, sixth-seeded Montrealer Felix Auger-Aliassime thrilled the near-capacity crowd with a 7-6 (6), 6-4 victory over Japan's Yoshihito Nishioka.

“I felt the pressure of being the second seed in this tournament and world No. 4,” Alcaraz said. “It's the first time I've felt this pressure and I couldn't handle it.”

Kyrgios, coming off a win last week in Washington, took out Medvedev 6-7 (2), 6-4, 6-2. The Russian controlled the first-set tiebreaker but Kyrgios opened with a break in the second set and didn't look back.

“The dynamic changed from there,” Kyrgios said. “I felt my game well and I was confident under pressure like never before.”

Medvedev, who claimed a title last week in Mexico, was handcuffed at times by the Australian's serve-and-volley game. Kyrgios was creative, steady, and even worked in a couple underhand serves to keep his opponent guessing.

“I knew he was feeling confident so I had to come out there with a game style that wasn't going to give him too much rhythm,” said Kyrgios, who improved to 3-1 in their head-to-head matchups.

Kyrgios, who reached the Wimbledon final last month, defeated Argentina's Sebastian Baez in the first round.

“He played very well,” said Medvedev, who won last year in Toronto. “The only thing that was a shame for me is that I played him so early because he is fit.

“He's among the top 10 or 15 players, so he will soon be a seeded player. It's a shame to have such a player as an opponent in the first (match).”

Paul, meanwhile, the world No. 34, saved a match ball in a tiebreaker and converted his fifth match point in the deciding set.

“I feel like we had flashes of really probably the highest-level tennis I've ever played,” he said.

Auger-Aliassime, the lone Canadian left in the draw, took the first set with a brilliant cross-court winner to cap a 20-shot rally. He stood for a few seconds with his arms stretched out by his sides as the partisan crowd roared its approval.

“I'm happy with the way I stayed composed,” Auger-Aliassime said. “I took care of my serve and finished the match in straight sets.”

Auger-Aliassime will play ninth-seeded Cameron Norrie of Britain in the next round. Norrie dumped Botic van de Zandschulp of the Netherlands 6-1, 6-2.

Denis Shapovalov of Richmond Hill, Ont., Alexis Galarneau of Laval, Que., and Vasek Pospisil, a native of Vernon, B.C., all lost their first-round singles matches earlier in the week.

In doubles play, Pospisil and Sinner dropped a 4-6, 6-2, 10-8 decision to the French duo of Benjamin Bonzi and Gael Monfils. Italy's Simone Bolelli and Fabio Fognini posted a 6-4, 6-1 win over Calgary native Cleeve Harper and Liam Draxl of Newmarket, Ont.

Play continues through Sunday at the US$6.57-million tournament.

Nick Kyrgios of Australia serves to Daniil Medvedev during second round of play at the National Bank Open tennis tournament Wednesday August 10, 2022 in Montreal. THE CANADIAN PRESS/Paul Chiasson

Tommy Paul of the United States returns to Carlos Alcaraz of Spain during second round of play at the National Bank Open tennis tournament Wednesday August 10, 2022 in Montreal. THE CANADIAN PRESS/Paul Chiasson