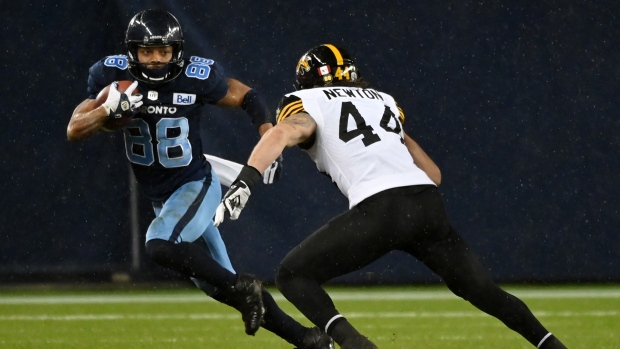 Toronto (9-4) clinched home-field advantage for the East Division final Dec. 5. And that's a big deal as the Argos improved to 6-0 at BMO Field this year before a season-high gathering of 10,851 that braved a steady wind throughout and rain in the opening half.

Toronto earned its third win in four games this season versus archrival Hamilton (7-6). The Argos will complete their regular season Tuesday night at home against the Edmonton Elks (2-9).

Hamilton suffered its first loss in four games and will finish its regular season next Saturday against the visiting Saskatchewan Roughriders (8-4). And that could be a monumental game for the Ticats depending on how the third-place Montreal Alouettes (6-6) fare against the Winnipeg Blue Bombers (11-1) on Saturday.

Montreal completes its regular season next Friday by hosting the Ottawa Redblacks (2-11).

Hamilton and Montreal split their season series 1-1 but the Ticats own the tiebreaker based upon point differential. So they'd finish ahead of the Alouettes if the two teams ended up tied in the standings.

Toronto did well in the second and third quarters with the brisk wind at its back. Hamilton got the advantage to open the fourth at the Argos' 40 trailing 17-3 but on its second offensive play starter Jeremiah Masoli was intercepted by Jalen Collins, Masoli's first pick in 166 pass attempts.

And that set up McLeod Bethel-Thompson's 12-yard TD strike to Gittens Jr. at 4:50 to give Toronto a commanding 24-3 advantage. Hamilton's Taylor Bertolet missed a 35-yard field goal attempt at 8:20 for a single.

Dane Evans scored on a one-yard TD run at 13:11 before Masoli found Sean Thomas Erlington on the two-point convert to cut the Argos' lead to 24-12. But Edwards recovered the onside kick with 1:46 remaining and completed the scoring with a 78-yard interception return for a touchdown at 14:58.

Masoli finished 22-of-40 passing for 326 yards with two interceptions while Tim White had five receptions for 110 yards.

McLeod Bethel-Thompson finished 26-of-34 passes for 250 yards with a TD and interception. Gittens had seven catches for 72 yards.

Bertolet put Hamilton on the scoreboard with a 27-yard field goal at 12:25 of the third into the wind.

Bede's 39-yard field goal on the final play of the second quarter staked Toronto to a 14-0 halftime lead as the Argos scored all of their points in a rainy opening half with the wind at their backs. Chandler Worthy's 17-yard return of Joel Whitford's 41-yard punt into the wind put Toronto at its 46-yard line with 40 seconds remaining.

Pipkin scored the opening half's lone TD on a one-yard run at 13:42 that was set up by Worthy's 37-yard punt return to the Hamilton 35-yard line. Before Bede's successful convert, Hamilton linebacker Jovan Santos-Knox was ejected for rough play.

Hamilton struggled offensively in the first half but especially going into the wind in the second. Five times Masoli attempted passes of 40-plus yards, but failed to connect and on another he wasn't helped by a Ticats receiver dropping a pass.

Masoli was much more effective running the ball (two carries, 34 yards) than passing (6-of-17 for 40 yards) in the opening half. Bethel-Thompson completed 15-of-20 attempts for 148 yards with an interception.