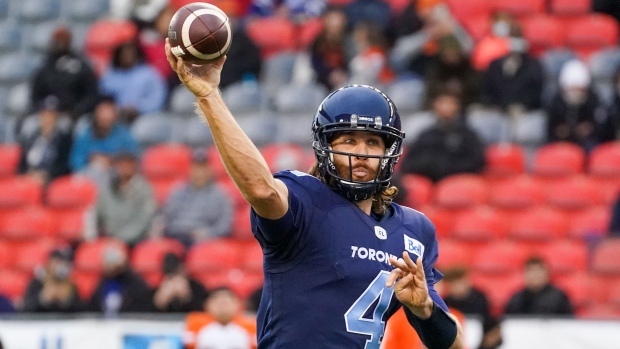 Toronto Argonauts quarterback McLeod Bethel-Thompson (4) throws a pass against the BC Lions during first half CFL action in Toronto on Saturday, Oct. 30, 2021. THE CANADIAN PRESS/Evan Buhler

TORONTO -- Two days into CFL free agency and the Toronto Argonauts already like what they see.

Signing running back Andrew Harris, defensive linemen Ja'Gared Davis and Adrian Tracy, linebacker Wynton McManis, defensive back DaShaun Amos and offensive lineman Justin Lawrence will do that to you.

Add that to the recent re-signing of quarterback McLeod Bethel-Thompson, linebacker Henoc Muamba, defensive back Chris Edwards, receiver DaVaris Daniels and kicker Boris Bede and the Argos are feeling more than optimistic about the future.

The 32-year-old Muamba, back for his second season in Toronto, believes the Argos are the team to beat in the East in '22.

"I can't help myself but to believe that," Muamba told a virtual availability Wednesday. "When I already know what we had in the locker-room. The will, the desire to win is in there. The skill, the talent and the ability to do so was already in there. And we absolutely feel like we fell short of what we were supposed to (do) and were capable of accomplishing.

"And on top of that to be able to add the guys on this call right here … Man we feel like we're a good team. I'm just excited to get to work."

The 2022 season represents unfinished business for Toronto, which finished first in the East last season at 9-5-0 but lost 27-19 to Hamilton in the East final after squandering a 12-0 lead.

Davis was in Ticats colours that day and was a force throughout the playoffs even if Hamilton fell short in a Grey Cup loss to Winnipeg.

The 31-year-old Texas native was an East all-star in 2019 after finishing second in the CFL with 13 sacks and adding 54 defensive tackles in his first year in Hamilton.

The move to Toronto reunites him with Argos defensive co-ordinator Corey Mace, who previously coached Davis in Calgary.

It will also make him teammates with Harris, a powerhouse runner who comes from Winnipeg.

"Andrew Harris is a Hall of Famer," said Davis. "Being able to add what he brings, not only on the field but off the field to a team that's trying to establish what they're trying to do here -- he really embodies what (Toronto GM) Pinball (Clemons) wants done.

"And what he's going to do for us is going to be tremendous."

Tracy sat out last season, mostly due to the uncertainty created by the COVID-19 pandemic.

The 34-year-old played five seasons with the Hamilton Tiger-Cats (2015-19) before signing with the Montreal Alouettes in 2020. He never played for the Als with the CFL cancelling the '20 season.

Tracy says he had plenty of time to survey the league during his time away.

"Seeing what was coming together from last year and what they (the Argos) had, it just felt right. It seemed like it was the proper decision for me to sign here with the opportunity that's available, with the pedigree that's already in the locker-room and with the culture that is trying to be established," said Tracy.

"The ultimate goal is to win. We don't just play only for the love of the game. We play to win. And so knowing that that's the sentiment across the board, from the top all the way down, coming to Toronto was an easy decision."