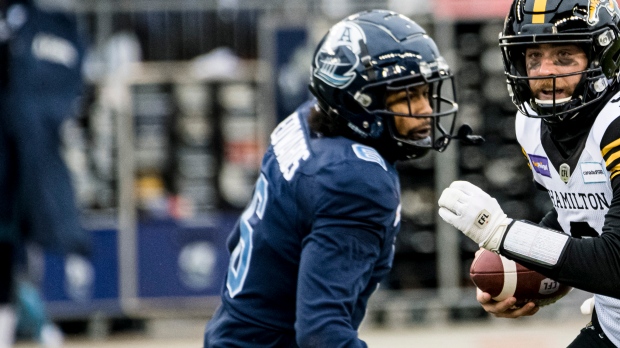 TORONTO - The CFL has suspended Toronto Argonauts defensive back Chris Edwards six games for his role in an altercation with a fan following the East Division final.

The Hamilton Tiger-Cats defeated Toronto 27-19 at BMO Field on Dec. 5 to advance to the Grey Cup.

After the game, some Argos players and personnel became involved in an altercation with fans as they left the field.

Video of the incident, widely circulated on social media, shows Edwards appearing to get into a shoving match with a Ticats fan.

The CFL said in a release that the suspension will commence in the first regular-season game for which Edwards is eligible.

Former Argonauts vice-president of player personnel John Murphy, who was also involved in the incident, was fired by the team on Dec. 14.

The league also fined Argos quarterback McLeod Bethel-Thompson for “an inappropriate on-field incident with a cameraperson” following the East final.