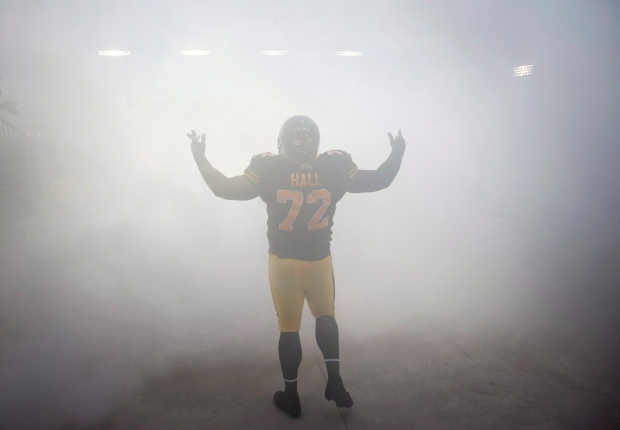 Hamilton Tiger-Cats' Bryan Hall walks through fog before taking the field in CFL action against the Edmonton Eskimos at Tim Hortons Field in Hamilton, Ont. on Saturday, Sept. 20, 2014. (The Canadian Press/Darren Calabrese)

TORONTO - The Toronto Argonauts shored up their defensive line by signing American Bryan Hall on Monday.

The six-foot-one, 295-pound Hall spent the last two seasons with the Hamilton Tiger-Cats. He registered 73 tackles, seven sacks, four tackles for a loss, one forced fumble and a blocked kick in 33 career games with the Ticats.

"Bryan is a veteran player who brings high energy to not only our defensive line but our defence as a whole," Argos GM Jim Barker said in a statement. "We're looking forward to having his infectious personality and leadership in our locker room this season."

Prior to playing in the CFL, Hall spent three seasons with the NFL's Baltimore Ravens, winning a Super Bowl title in 2012.