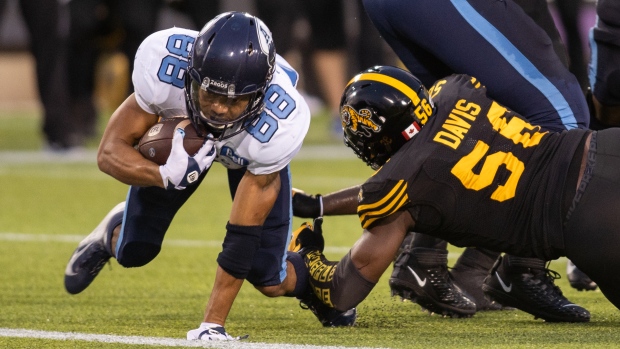 It's not been an easy path, but middle linebacker Simoni Lawrence and the Hamilton Tiger-Cats have themselves in position to move atop the East Division standings.

Hamilton (7-5) visits archrival Toronto (8-4) on Friday night in the fourth and final regular-season meeting between the two teams.

The Argonauts lead 2-1 - courtesy of two one-point victories - but the Ticats can cement the series (gaining the tiebreaker should the two teams end up with identical records), cement a home playoff game and assume first in the East with a victory.

“It's perfect,” Lawrence said Monday during a videoconference. “I think three weeks ago in my mind, I wrote on my whiteboard everything is going to play out the way we want it to and this week we can't ask for anything better.”

The Ticats have won three straight since a 24-23 loss to Toronto at Tim Hortons Field on Oct. 11. Hamilton opened the year with two consecutive losses, improved to 2-2 then fell to 4-5 after losing to the Argos.

“That's the thing, in football and life people compare the two so much, and you just have to be able to adjust to the ebb and flow,” Lawrence said. “And as long as you have the consistent message, which we have great coaches that always push the same messages, we're always going to be fine.

“We're on a 3-0 run right now and we're just trying to make it 4-0. We're just going to keep following our blueprint.”

Toronto can clinch first in the East - and home field for the conference final Dec. 5 - with a win or tie. That's important considering the Argos are 5-0 this year at BMO Field.

“We obviously understand what's at stake but that won't make us prepare any different,” said Hamilton head coach Orlondo Steinauer. “Obviously they're in the top spot for a reason, they found ways to win football games and so credit them.

“I like where we're at and I don't mind the lead-up and buildup because that's part of it ... at the same time we have a job to do behind the closed doors and walls and of course between the white lines in practice. That's really where our focus is versus what the game means.”

And while Toronto, Hamilton and the Montreal Alouettes (6-6) have all cemented East Division playoff berths, they continue to jockey for position.

Toronto will have a quick turnaround to end its season, hosting the Edmonton Elks (2-9) on Nov. 16 in a rescheduled contest. Hamilton will be home to the Saskatchewan Roughriders (7-4) on Nov. 20 while Montreal's final two contests are at Molson Stadium versus the Winnipeg Blue Bombers (11-1) on Saturday and Ottawa Redblacks (2-11) on Nov. 19.

Toronto's first win was a 17-16 decision at BMO Field on Sept. 10. Hamilton had a chance to forced overtime when Sean Thomas Erlington scored on a 21-yard TD run with 1:31 remaining but Michael Domagala missed the convert.

Hamilton won the series opener 32-16 on Labour Day at Tim Hortons Field. Dane Evans threw for 248 yards and two TDs before suffering a lower-body injury in the Sept. 10 rematch.

Veteran Jeremiah Masoli will make a sixth straight start for Hamilton and chase a fourth consecutive win. He led the Ticats to a 26-18 home decision over the B.C. Lions on Friday night, the first time in four games Masoli didn't crack the 300-yard passing plateau.

He began that streak with 361 passing yards and two TDs against Toronto on Oct. 11. Over the five-game stretch, Masoli has completed 108-of-144 passes (74.5 per cent) for 1,519 yards with nine touchdowns and no interceptions.

In fact, Masoli hasn't thrown an interception in his last 118 pass attempts.

Toronto has won two straight and six-of-eight overall since its Labour Day loss to Hamilton. Five of those victories have been by three or fewer points, including the last two (31-29 in overtime versus B.C., 23-20 versus Ottawa).

“There's a lot of stuff that builds up within the three games prior,” Lawrence said. “Some things that were said and done you're like, 'Oh, yes, I get to get my face back on this,' so it's going to be fun.