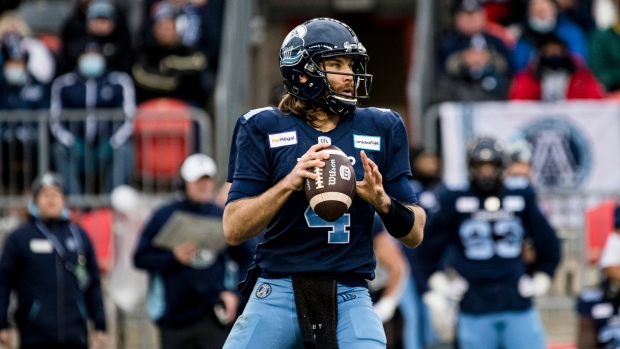 Toronto Argonauts quarterback McLeod Bethel-Thompson apologized for a heated post-game interaction with a TSN cameraman a day after his CFL team was defeated in the East Division final by the Hamilton Tiger-Cats.

The 33-year-old Bethel-Thompson was not made available post-game after his team's 27-19 loss at BMO Field on Sunday.

But he was part of the Argonauts season-ending media availability on Monday, along with general manager Michael Clemons and head coach Ryan Dinwiddie.

Bethel-Thompson clashed with the cameraman as he walked off the field on Sunday, bumping with the TSN employee a few times.

“I think tempers were high on a lot of ends,” Bethel-Thompson said. “I know, the cameraman was just trying to do his job. I felt like he was too close in a vindictive way, but there was zero excuse for me to touch the camera in any form or fashion.

“It's unacceptable behaviour. And hopefully, this can reach that cameraman that I'm very sorry for interfering with his work. I was trying to get to the Hamilton team to congratulate them, which was a hard enough endeavour.”

At halftime, the Argonauts enjoyed a 12-0 lead at halftime but settled for four field goals from kicker Boris Bede despite a strong opening two quarters on offence. In fact, all 19 points from Toronto came off the right foot of Bede.

Bethel-Thompson took part of the blame for the second-half flop and failure to punch in at least one touchdown.

“We were the better team (Sunday),” he said. “We had a good first half. But they found a way to win. And that's what great teams do. So we're not at that level yet. And like I said, we had to finish the game because you don't get a win for leading at halftime. We should have been up by 24, if not 30 points at halftime. And we didn't do that. We didn't close the door when we had the opportunity.”

The Bethel-Thompson on-field incident with the cameraman wasn't the only post-game confrontation for the Argonauts. As the players made their way to the locker room, a bunch of Hamilton fans berated the losers.

Argonauts defensive back Chris Edwards took exception, hopped over a metal barrier to confront a fan clad in Tiger-Cats colours. There was a physical altercation between Edwards and the visiting fan, but wide receiver Dejon Brissett played peacekeeper and held the fan until police and facility security people intervened.

“The Toronto Argonauts, in conjunction with MLSE security, the CFL league office and local police, are investigating a post-game incident involving team personnel and visiting fans. The club will issue a statement once the investigation is complete and any outcomes are determined,” the Argonauts released in a statement.

However, Clemons, the team's uber-optimistic GM, added in his remarks on Monday that he was disheartened to learn about the altercation with his players and fans.

“Any time there's a negative association with players and fans, it's disappointing,” Clemons said.

“I thank many of the Hamilton fans yesterday for coming down. As for the altercation itself, I don't know the details to give a real qualified answer to that question. But any time there's a negative experience between our players and our fans, it's extremely disappointing because fans are why we play. They're the people that support us whether they're home or away.”

The Argonauts finished the regular season in the top spot in the East Division at 9-5 under Dinwiddie in his rookie year at the helm of a CFL team. He will spend the off-season with many personnel and coaching staff decisions, beginning with defensive co-ordinator Chris Jones.

“I'd like to have everyone back,” Dinwiddie said of his coaching staff. “We'll have to see what happens with Chris. I'm sure he'll have some opportunities to be a head coach.”