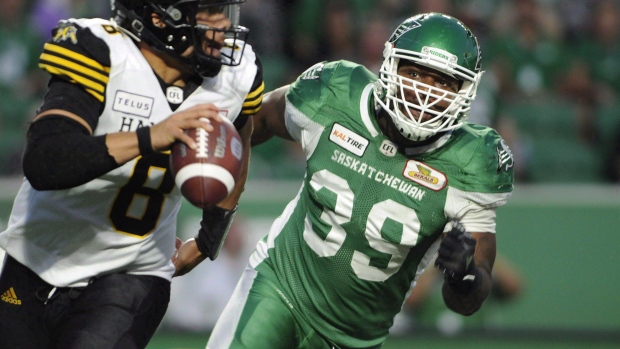 The 37-year-old Hughes was released by the Saskatchewan Roughriders on Wednesday when the two sides couldn't come to terms on a deal ahead of the start of free agency next week. He signed a two-year deal with Toronto.

Hughes has led the league in sacks each of the past four seasons.

The native of Saginaw, Mich., spent the past two years with Saskatchewan after being traded twice on the same day - from Calgary to Hamilton and then to the Roughriders.

Hughes broke into the CFL in 2008 with Calgary and spent 10 years with the Stampeders, tying for the franchise lead with 99 career sacks.

“We couldn't be more thrilled to have Charleston in Double Blue,” Argos vice president of player personnel John Murphy said in a statement. “His list of accomplishments speaks for itself and the veteran presence he will bring to the locker room is immeasurable. Charleston makes a living in other team's backfields and we are ecstatic he is on our side.”

Law's playing rights were acquired in a trade with the Calgary Stampeders earlier this week. The 32-year-old was due to become a free agent next week.

The five-year CFL veteran has 32 sacks in 48 career CFL games. Before coming to Calgary, he played two years in the NFL with San Diego.

The signings were the latest big moves by the Argos in a busy week. The team signed quarterback Nick Arbuckle after cutting fellow pivot Matt Nichols and acquired Eric Rogers, Law and defensive back Robertson Daniel in a trade with the Stamps.

Grant, who attended training camp with Hamilton before joining Winnipeg's practice roster, returned two punts for touchdowns in his Bombers debut in August 2019 against Calgary.

Edmonton signed Rogers prior to the 2019 season, but he suffered a season-ending injury in training camp.

Rogers broke into the CFL with Toronto in 2013 and then signed with Ottawa in 2015, going on to win the league's most outstanding offensive lineman award that year.

Hoover was originally selected by Edmonton in the fourth round (31st overall) in the 2017 CFL Draft. Over his three year CFL career, the Waterloo product has accumulated 65 tackles, 18 special teams tackles, two interceptions and a forced fumble.

Dupuis has played in 75 games over five seasons with Toronto and Edmonton. Over his career he has been well regarded for his blocking, but he has also contributed 24 receptions for 255 yards on offence.

This report by The Canadian Press was first published Feb. 4, 2021.