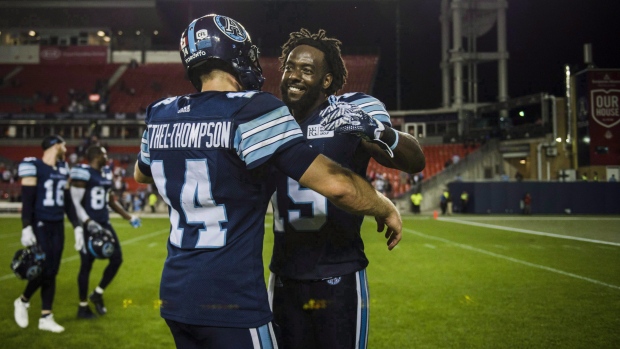 TORONTO - S.J. Green is getting a head start on CFL free agency.

The Toronto Argonauts granted the veteran American receiver's request to be released Friday. He was scheduled to become a free agent Tuesday.

“He asked for his release to pursue other opportunities,” Argos GM Mike (Pinball) Clemons said in a statement. “We grant his request with a pint of sorrow and a gallon of gratitude, and a gentle reminder that the door is still open.”

Green, 34, spent three seasons with Toronto after being acquired from the Montreal Alouettes in April 2017. He was a 1,000-yard receiver throughout his Argos' tenure and last year became the 18th player in CFL history to top 10,000 career yards.

Greene, a 2015 fifth-round pick of the Jacksonville Jaguars, appeared in 25 regular-season games with the NFL squad. The 27-year-old had 30 receptions for 185 yards and two touchdowns while also returning 41 punts for 448 yards and a TD.

Greene played collegiately at Florida State and helped the Seminoles capture the '13 BCS title. He registered 270 catches for 3,830 yards and 29 TDs, becoming the school's all-time leader in receptions and yards.