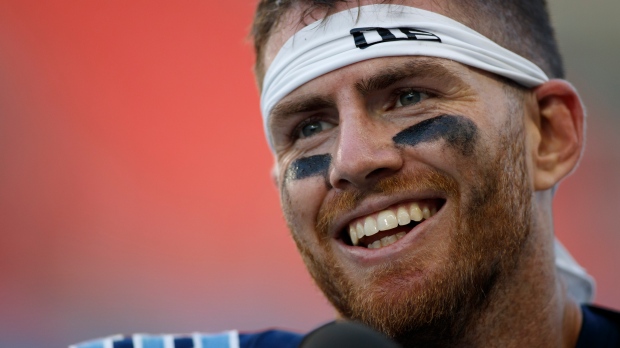 Bethel-Thompson became the clear-cut starter Tuesday after Toronto dealt quarterback Nick Arbuckle to Edmonton for a conditional 2022 third-round draft pick and the rights to American quarterback Chad Kelly. He's the nephew for former Buffalo Bills star Jim Kelly who was on the Elks' negotiation list.

If Arbuckle, who signed a one-year deal with Toronto prior to the '21 season, re-signs with Edmonton, the pick will become a second-round selection.

Toronto signed Arbuckle, 28, with the intention of him being the starter, but twice he was hampered by hamstring injuries. Bethel-Thompson started the Argos' first two regular-season games and has been under centre for the last four contests.

Bethel-Thompson (4-2 as the starter) and Arbuckle (2-2) helped guide Toronto to second in the East Division standings behind the Montreal Alouettes (6-4), who dispatched the Argos 37-16 last week. The six-foot-four, 220-pound Bethel-Thompson will be the full-time starter now - starting with Saturday afternoon's home game against the B.C. Lions (4-6) - with veteran Antonio Pipkin serving as the backup.

It's the first time in Bethel-Thompson's four-year tenure with Toronto that he's become the face of the franchise. The 33-year-old Californian threw a CFL-best 26 TD strikes in 13 starts in 2019 and was third in passing yards (4,024) but was more concerned Tuesday about losing a valued teammate than securing the starting position.

“Maybe that will sink in down the road but for now it's the loss of a really good teammate and the fact we need to have a really good week of practice and get a big win Saturday,” Bethel-Thompson said. “This is the best camaraderie in a quarterback room I've ever been a part of.

“He (Arbuckle) was huge in terms of how we installed every week. He's got a wicked smart football brain and so it's tough to see him go . . . hopefully they invest in him like the starter that he is in this league.”

Money also factored in the decision. John Murphy, Toronto's vice-president of player personnel, said the club couldn't afford to pay two quarterbacks as if they were starters, especially as more of Toronto's injured veterans become healthy and are ready to return.

The CFL trade deadline is 5 p.m. ET on Wednesday, but Murphy doesn't believe acquiring more talent is the best way for Toronto to improve its roster.

“The best way for us to improve what's here right now is for our unhealthy guys to get healthy as fast as they can,” he said. “There's currently nine guys on (six-game injured list) that started the season on the Week 1 roster who are currently not active and not participating in helping us.

“The second part is there are enough guys here who need to turn it on down the stretch who we acquired in the off-season for these very games. I have every expectation that in the coming weeks we start seeing the best out of them because that's why we acquired them in the first place. We were hopeful to play meaningful fall football. We've accomplished the first part of that, the second part is to be seen.”

The six-foot-one, 213-pound Arbuckle completed 96-of-153 passes for 1,158 yards with five touchdowns and six interceptions in seven games this season. Arbuckle began his CFL career with Calgary (2018-19) and spent 2020 with Ottawa after the Stampeders traded his rights there.

“It's never easy to make these decisions,” Dinwiddie said. “I have a great relationship with Nick, I appreciate him as a man.

“MacLeod just took the next step, we felt he was the starter . . . we feel like Nick has a future someplace else. I's good for him to get an opportunity to probably start in Edmonton.”

This report by The Canadian Press was first published Oct, 26, 2021.