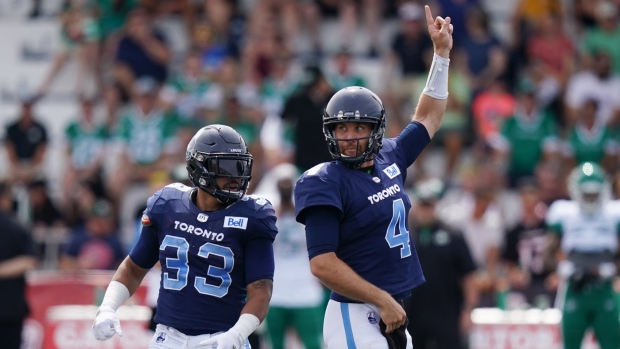 Toronto Argonauts' quarterback McLeod Bethel-Thompson, right, signals a call in front of teammate Andrew Harris looks to pass during the first half of CFL action against the Saskatchewan Roughriders at Acadia University in Wolfville, N.S., Saturday, July 16, 2022. Harris moved past Hall of Fame receiver Milt Stegall into fourth in all-time yards from scrimmage. THE CANADIAN PRESS/Darren Calabrese

WOLFVILLE, N.S. - Chalk up another career milestone for Andrew Harris.

Harris came into Toronto's game Saturday versus the Saskatchewan Roughriders needing 46 yards to move past Stegall (15,209).

He moved into fourth place impressively in the third quarter, when he took a pass in the backfield from McLeod Bethel-Thompson, headed up field and then hurdled a Saskatchewan defender for an 18-yard gain.

That gave Harris 57 net offensive yards from the scrimmage.

Harris also came into the game needing 114 yards rushing to become the first Canadian and sixth CFL player to reach the 10,000-yard plateau.

The five-foot-11, 216-pound Harris remains the top rusher from Canada in league history and is 399 yards behind Hall of Famer Charles Roberts (10,285) for sixth on the league's all-time list.

Harris, 35, is a three-time Grey Cup champion and five times has been a CFL all-star.

Harris began his CFL career with the B.C. Lions in 2010, playing six seasons before joining the hometown Winnipeg Blue Bombers in 2016. He signed with the Argos as a free agent before the '22 campaign.

Harris was named the top Canadian in the '11 championship game, then became the first player to win both Grey Cup MVP and outstanding Canadian honours in the same game (2019).

Harris was also named the CFL's outstanding Canadian in 2017 and has led the league in rushing three times.