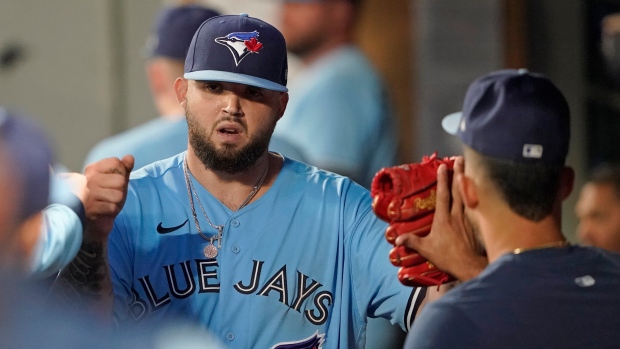 After standing up for his teammate following a bout of online bullying, Toronto Blue Jays pitcher Alek Manoah has been awarded Dove Men+Care’s first ‘sponsorship for sportsmanship.'

The sponsorship, which will be officially awarded to Manoah before Tuesday's game against the New York Yankees at Rogers Centre, comes with proceeds of $100,000 to be donated to charity.

Real #SportsMenCare. We’re proud to recognize @alek_manoah6 for bringing more care to the world of sport. Stay tuned for his official announcement before next Tuesday’s game!#DoveMenCare pic.twitter.com/MuFgKBcJJo

The act of sportsmanship in question was displayed on social media in an interaction between Manoah and TSN Montreal radio host Matthew Ross on Sept. 14, after Ross made a negative comment about Blue Jays catcher Alejandro Kirk’s weight. Bell Media is the parent company of TSN and CTV.

"It's cute and all, but it's also embarrassing for the sport. Giving guys like this prominence feeds negative stereotypes,” wrote Ross in a now-deleted tweet in response to a video of Kirk running from first plate to home posted by the Toronto Blue Jays.

What’s actually embarrassing for the sport is people that go by the name of Matthew and have never played a day in the big leagues thinking they can control the narrative and stereotypes. Go ahead and tell that 8 year old kid who is 10lbs over weight that he should quit now. Or https://t.co/c4cbTABMbx

Manoah was quick to come to his teammate's defence, tweeting back at Ross, “What’s actually embarrassing for the sport is people that go by the name of Matthew and have never played a day in the big leagues thinking they can control the narrative and stereotypes. Go ahead and tell that 8-year-old kid who is 10lbs overweight that he should quit now.”

“Just step aside from the keyboard and let [Kirk] inspire those kids to continue to chase their dreams and chase greatness,” he added shortly after.

After a bit of back and forth between Manoah and Ross, Ross eventually deleted both his tweets and his Twitter account. Days later, he posted an apology from his podcast's social media accounts.

“I want to sincerely apologize to Alejandro Kirk, Alek Manoah, the Toronto Blue Jays, Jays fans and anyone else offended by my initial tweet,” he said.

“The words were harsh. The sentiment was out of bounds and I deeply regret it. Period.” 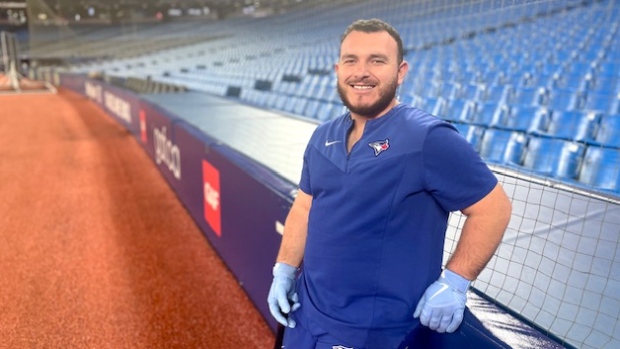 In an interview with CTV News Toronto Tuesday, Manoah said he meant what he said “from the heart.”

“There’s a lot of trolls out there,” Manoah said. “But the biggest thing I saw with that negative tweet was that it was from a verified account [..] He obviously has a voice that people listen to and I didn’t agree with how he was using his platform to bring negativity to one of our players.”

Manoah spoke highly of Kirk, saying he “plays and works so hard.”

“He’s a great teammate, and he inspires a lot of people to want to be great.”

Of Kirk and Manoah's relationship, Manoah said they're close both "on and off the field."

"My bond with him is pretty close and we both know that," he said. "We don't even really need to talk much about this. He knows I have his back no matter what, I know he has my break no matter what -- he's going to be my brother always."

After being informed he was the recipient of Dove Men+Care’s first ‘sportsmanship sponsorship,’ Manoah decided he would donate the proceeds to KidsSport.

“KidsSports is an organization that allows the next generation of players to continue to play – they come from all different backgrounds, they’re not all the stereotypical athletes,” he said.

“It’s very hard to get to this stage [in the MLB], so why are we going to throw extra negative connotations on kids when it’s already hard enough?”

When asked what he hoped fans would take from all this, Manoah said he hopes they never let negativity hold them back.

“Continue to follow your dreams, no matter what,” he said.

“There’s going to be a lot of negative people, a lot of people that try to put you down, but continue to follow your dreams and work hard, as long as you love what you do.”