A look at the 2021 Toronto Blue Jays, an improved team that just missed playoffs 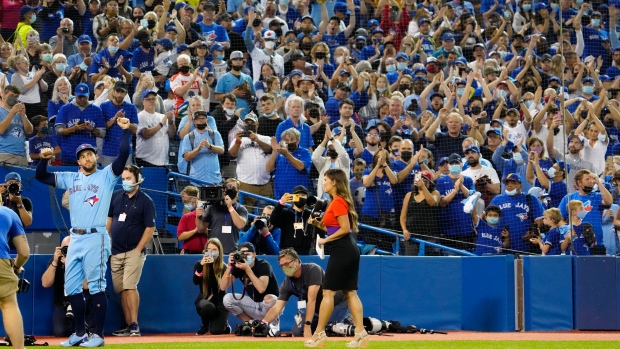 TORONTO - A mediocre start was followed by a strong second half as the Toronto Blue Jays made strides in an unusual regular season capped by a memorable final day that left the team achingly close to a post-season return.

The Blue Jays played in three different home ballparks in 2021 due to pandemic restrictions. A September surge made for a thrilling stretch drive, but Toronto still had to settle for a fourth-place finish in the American League East.

A 91-71 record was Toronto's best regular-season mark since the Blue Jays went 93-69 in 2015 and made the first of two straight American League Championship Series appearances.

Here's a report-card look at the 2021 team, which appears primed to become a contender next year:

STARTING ROTATION: Robbie Ray became the ace of a rotation that stabilized after the arrival of Jose Berrios at the trade deadline. Ray led the major leagues with 247 strikeouts and may win the AL Cy Young Award. Hyun Jin Ryu faded in the second half but still posted decent numbers and Alek Manoah enjoyed a strong rookie season. Steven Matz was also a reliable option. Overall grade: B

CATCHER: A three-backstop approach provided depth and an easy fix when injuries occurred but also resulted in limited playing time and a loss of rhythm. Danny Jansen, Reese McGuire and Alejandro Kirk all struggled with offensive consistency. Jansen's hot September after an injured-list stint, coupled with his comfort level with the starting pitchers, should serve him well going forward. Overall grade: C-

FIRST BASE: Vladimir Guerrero Jr., showed why he has the potential to become an all-time great. He flirted with the Triple Crown and is a contender for the AL most valuable player award. Guerrero belted 48 homers, drove in 111 runs and finished with a .311 average and 1.002 OPS. He also made great strides at the defensive end. A generational talent who's just getting started. Overall grade: A+

SECOND BASE: Marcus Semien bet on himself by signing a one-year deal with Toronto after an injury-plagued campaign in the shortened 2020 season. He did more than just build his value ahead of free agency. Semien moved over from shortstop and delivered a huge season that has him in the MVP conversation and set him up for a lucrative multi-year deal. Overall grade: A+

SHORTSTOP: In his first full season for the Blue Jays, Bo Bichette delivered with an all-star campaign. He led the AL with 191 hits and was a rock in the heart of Toronto's batting order. He showed off his power too, with 29 home runs and 102 RBIs. Bichette was second in the league with 121 runs scored. Bichette has work to do with his defensive play though. He led the league with 24 errors. Overall grade: B+

THIRD BASE: With Cavan Biggio hamstrung by injuries for parts of the season, Toronto used a patchwork approach to the hot corner with mixed results. Santiago Espinal proved to be the most reliable option despite his lack of power. The backup infielder hit .311 in a limited role and his presence was missed late in the season when he was out for four weeks due to a hip flexor strain. Overall grade: C

LEFT FIELD: Lourdes Gurriel Jr., hit the 500-at-bat plateau for the first time and helped key Toronto's improved play in September before a finger injury stunted his momentum. He posted respectable totals of 21 homers and 84 RBIs on the year but remains a work in progress on the defensive end. Overall grade: C+

CENTRE FIELD: The plan was for big-ticket free-agent signing George Springer to anchor the outfield but he was forced to the injured list on three occasions. He still hit 22 homers and drove in 50 runs over essentially half a season. Toronto had a surplus of outfielders at the beginning of the year and the depth came in handy. Randal Grichuk had a solid first half before cooling down considerably. Overall grade: B-

RIGHT FIELD: Teoscar Hernandez made improvements in the outfield but his bat more than made up for any defensive inefficiencies. A 2020 Silver Slugger winner, he enjoyed another strong year at the plate with 32 homers and a team-high 116 RBIs. Grichuk also spent some time in right field. Overall grade: B

BULLPEN: There were more misses than hits on this relief crew. Among the bright spots: Tim Mayza eventually settled into a regular high-leverage role and Jordan Romano of Markham, Ont., was an effective closer. Still, while improvements were eventually made, there were too many moving parts over the season and the bullpen struggled more often than not. Overall grade: C-

MANAGER: It can be easy to criticize things like the batting order selection or the timing of bullpen decisions without knowing the many intricacies behind the decisions. From a broad-stroke perspective, Charlie Montoyo and his staff got decent results despite playing away from home until late July. They deserve credit for a 91-win season and guiding a team that looks ready for the next level. Overall grade: B