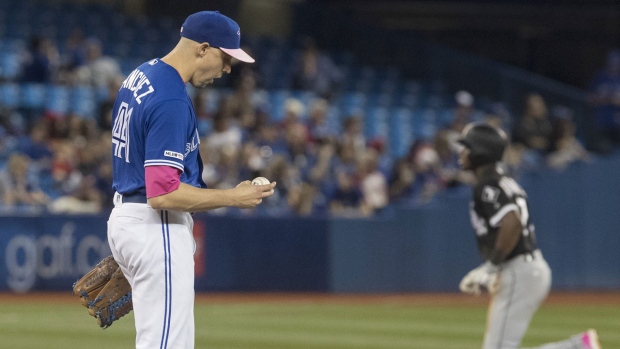 TORONTO -- Aaron Sanchez struck out 11 batters but gave up five runs on two homers in the fourth inning as the Chicago White Sox defeated the Toronto Blue Jays 5-1 on Sunday afternoon.

Sanchez (3-4) struck out five in a row over the first two innings, giving up nine hits and a pair of walks over six innings of work in his third straight loss.

Rowdy Tellez had an RBI single in the first inning for the Blue Jays (16-24), who have lost 10 of their last 12 games and have scored two or fewer runs six in their previous seven games.

Toronto fell to eight games below .500 with the loss, a new season low.

Daniel Hudson, Tim Mayza and Joe Biagini each pitched a scoreless inning of relief for Toronto.

Yonder Alonso and Tim Anderson had home runs for the White Sox (18-21). All of Chicago's offence came in the fourth inning.

Lucas Giolito (4-1) was solid over seven innings. He allowed just one run on four hits. He struck out eight batters and walked one.

Ryan Burr and Aaron Bummer were flawless in their respective innings out of the bullpen.

Freddy Galvis scored from third base on Tellez's single in the first inning. Rookie sensation Vladimir Guerrero Jr. had put Galvis into scoring position with a double earlier in the inning.

Sanchez looked dominant until the fourth inning when Alonso hit a two-run homer off a 2-2 fastball over the centre-field wall for a 2-1 Chicago lead.

The Toronto starter then gave up a pair of back-to-back singles after the home run, prompting a visit to the mound by Blue Jays pitching coach Pete Walker. That chat didn't help, as Sanchez gave up a three-run homer to Anderson after for a 5-1 White Sox lead.

Notes: White Sox outfielder Leury Garcia left the game with lower-back stiffness in the fourth inning when Jose Rondon came in to pinch hit. Garcia went hard into the centre-field wall when fielding a Justin Smoak liner. Announced attendance at Rogers Centre was 24,222.