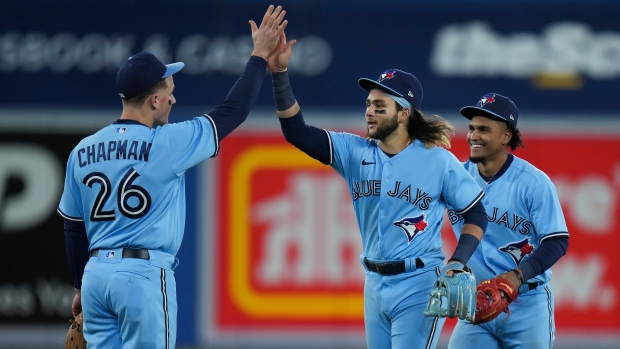 TORONTO - Bo Bichette and Matt Chapman each had a solo home run as the Toronto Blue Jays beat the Seattle Mariners 6-2 on Monday.

Bichette drove in another run with a single in the eighth inning for Toronto (19-17) and pinch-hitter Alejandro Kirk's single scored two.

Yusei Kikuchi (2-1) allowed only one hit over six innings with six strikeouts in one of his best outings of the Major League Baseball season.

Trevor Richards , Yimi Garcia, Ryan Borucki, Ross Stripling and Adam Cimber came on in relief. Richards and Stripling both allowed runs. Cimber earned a save in his 2/3 of an inning.

Eugenio Suarez had a homer in the seventh inning for Seattle (16-20) and Adam Frazier added an RBI single in the ninth.

Bichette lofted a 2-2 pitch from Flexen over the left-field fence to give the Blue Jays a 1-0 lead in the first. It was his third home run of the season and a small section of fans near the homer's landing spot started chanting “M-V-P!” as Bichette rounded the bases.

Chapman followed that up with a solo shot of his own in the next inning. With two out, he launched a 1-0 pitch to deep centre for a 2-0 lead for his sixth of the year.

Kikuchi's no-hit bid was broken up in the fifth when Mariners left-fielder Jesse Winker bounced a double down the first-base line. Kikuchi got out of the inning without surrendering any runs, however.

Raimel Tapia added to Toronto's lead with a two-out single to left field in the sixth inning. His base hit off of Murfree drove in pinch runner Vinny Capra from second base for a 3-0 lead. That run was charged to Flexen.

Seattle finally answered back in the seventh when Suarez hit his seventh home run of the season off of Richards to cut the score to 3-1.

Kirk came on as a pinch-hitter for designated hitter Zack Collins in the seventh and drove an RBI single to centre field to score Bichette and Vladimir Guerrero Jr., to extend Toronto's lead by two.

Bichette had a bloop single in the eighth inning that brought Tapia in from second base for a 6-1 Blue Jays lead.

Frazier's second hit of the game came in the ninth inning, driving in Suarez for the final score.

MAYZA ON THE IL - Left-handed reliever Tim Mayza was put on the Blue Jays' 15-day injured list with left forearm inflammation on Monday retroactive to May 15. Toronto manager Charlie Montoyo said Mayza felt the inflammation after his last appearance. Mayza is having an MRI among other tests done on his arm. Lefty Andrew Vasquez was recalled from Buffalo in a corresponding move.

HERE TODAY, HEIN TOMORROW - Catcher Tyler Heineman was claimed off outright waivers by the Pittsburgh Pirates on Monday afternoon. The Blue Jays had optioned Heineman to triple-A Buffalo on Saturday to make space for catcher Danny Jansen on the team's Major League roster after Jansen came off the injured list. LOOKING AHEAD - Jose Berrios (2-2) will get the start Tuesday night as Toronto continues its three-game series with Seattle. Logan Gilbery (4-1) will take the mound for the Mariners.

This report by The Canadian Press was first published May 16, 2022.