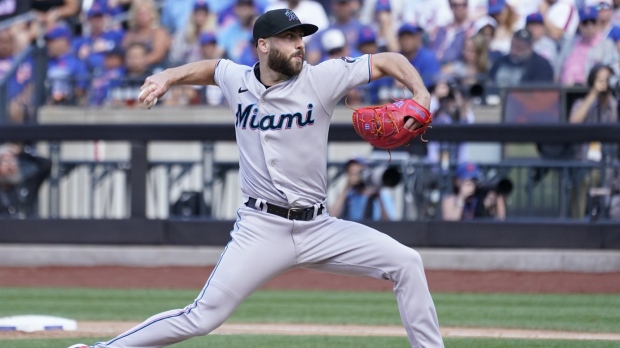 Merrifield was one of 10 Royals who couldn't accompany the team for a four-game series in Toronto last month because he was not vaccinated against COVID-19.

The 33-year-old, who can play second base and outfield, is batting .240 with six home runs and 42 runs batted in this season.

“He (Merrifield) is such a good player. He is very accomplished with incredible experiences, the versatility, the contact ability, the speed, playing multiple positions, incredible baserunner, feel very good about him at so many different positions and that versatility will help us down the stretch â€¦ we're very well covered now,” Atkins told a Zoom call minutes before the Jays opened their nine-game road trip in Florida.

The GM didn't bite when asked about his plans for get vaccinated or if he'd be pitching at the Rogers Centre any time soon.

“He was acquired right at the deadline, so this is a very fresh acquisition and so because of that I'm not going to comment more on that process for him, and let him work through that with his family. I've basically said hello to him and that's it,” added Atkins.

Earlier, the Jays acquired Bass and Pop from the Miami Marlins for shortstop prospect Jordan Groshans.

The Jays also acquired aplayer to be named later in the deal.

Bass will get the chance to pitch in meaningful games in front of Blue Jays fans, which he didn't have the opportunity to do in his first stint with the club. The Blue Jays played home games during the shortened 2020 season at Sahlen Field, home of the Triple-A Buffalo Bisons, because of COVID-19 restrictions at the Canada-U. S. border.

“You're going to a team that has a chance of going to the post-season, which as players is what we always want to do,” Bass told reporters in Miami before the Marlins hosted the Cincinnati Reds on Tuesday.

“Our end goal is to win the World Series. So that part is exciting, going to Toronto for that opportunity.”

The 25-year-old Pop, from Brampton, Ont., has a 2-0 record with a 3.60 earned-run average in 18 appearances with the Marlins this season, his second in the majors.

He was drafted by the Blue Jays in the 23rd round of the 2014 MLB draft, but decided not to sign and instead played collegiately at the University of Kentucky.

Pop, who says he grew up a Blue Jays fan, called news of the trade “bittersweet” but said he is looking forward to playing close to home.

“It's pretty special to be able to go back home and see my family and play for the Blue Jays,” he said in Miami.

“I've got a lot of friends, a lot of people rooting for them right now, and to be a part of what they're doing over there is pretty amazing.”

In other moves, left-handed pitcher Anthony Banda was designated for assignment and lefty Andrew Vasquez was claimed off outright waivers by Philadelphia.

This report by The Canadian Press was first published Aug. 2, 2022.