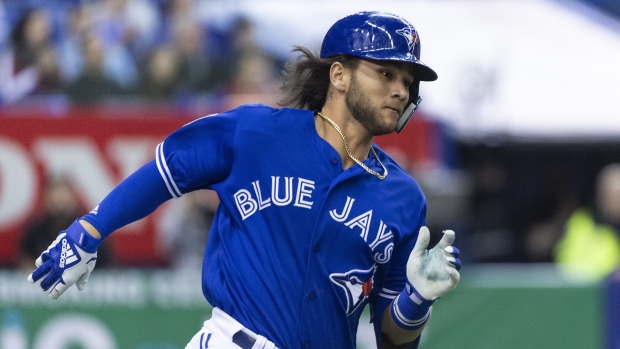 BUFFALO, N.Y. -- Bo Bichette looked the part of a major leaguer when he stepped to the plate at Sahlen Field for batting practice this week.

Sporting workout shorts and a long-sleeve T-shirt adorned with the familiar Blue Jays logo, Bichette stood out among his triple-A teammates who were mostly clad in typical blue and grey pre-game gear of the Buffalo Bisons.

Asked if his wardrobe choice was a conscious decision -- dressing for the job he wants, not the one he has -- the 21-year-old shortstop laughed.

"I just like this shirt better," he said with a smile.

Bichette, the son of former MLB outfielder Dante Bichette, is the last of Toronto's big three prospects still in the minor leagues after Vladimir Guerrero Jr. and Cavan Biggio debuted with the Jays earlier this year.

The trio of stars have been linked for the past few seasons as they rose together through Toronto's minor league system. They all started 2019 in triple-A, and Bichette expected them to break into the game's top level together.

"I was super happy for both of them, super happy to watch them do really well," Bichette told The Canadian Press before a Bisons game this week. "For me, it's tough knowing that they're there and I'm still on my journey. We always talked about coming up at the same time so for me to be the last one, it's not easy.

"But it is what it is. I'm just doing the best I can right now to get up there as soon as possible."

Bichette, who missed seven weeks of the season with a broken hand after he was hit by a pitch in late April, has been tearing through triple-A since returning to Buffalo on June 13. He continued his hot streak with two home runs in a 9-6 win over Charlotte on Wednesday.

Those numbers, he said, should speak for themselves when it comes to making his case for a promotion.

"I've done everything I can as far as I'm concerned to show them I'm ready."

Biggio and Guerrero made their MLB debuts while Bichette was out with his broken hand.

Having to miss nearly two months of a pivotal season may not have been ideal for the 2016 second-round draft pick, but Bichette doesn't think being healthy all year would have necessarily guaranteed a promotion.

The solid play this season of Freddy Galvis and Eric Sogard, who have created an infielder logjam on the major league team, haven't helped Bichette's cause.

"Obviously there's a chance that I could have gotten called up but there's situations in the big leagues that, if that's holding me back now I don't see why it wouldn't have held me back for the last two months anyways," he said.

"But I think everything is a blessing in disguise too. I went down (to Florida while rehabbing) and I got to have time off and come back refreshed and I feel great now. I'm ready to go."

Bisons manager Bobby Meacham can understand the frustration for a player itching to make his MLB debut. But he said the importance of refining skills at the triple-A level isn't lost on Bichette.

"I've been trying to tell these guys as much as I can: 'it's hard to keep focused on it but you're working on stuff. You can't work on stuff up there,"' Meacham said. "We can all say you can develop up there, we can all pretend it happens a lot but it doesn't.

"They need to develop skills to get better while they're here. I keep trying to impress that upon him and he's taken to that."

As much as Bichette has dominated at the plate, he's also strived to improve his defence this year.

After making a disappointing 27 errors at double-A New Hampshire through 2018, the No. 8 prospect in baseball started taking his fielding more seriously.

"I had always just figured I'd be able to do it without practising too much but I finally realized last year that I would have to put work into it," Bichette said. "So that was the first time in my life that I started taking ground balls every day and actually working on defence and obviously it's helped a lot."

Bichette said he hears the clamouring on social media from a Toronto fan base that's constantly calling for his promotion. And while he appreciates their support, he doesn't need it as any type of motivation.

He's got that covered on his own.

"It's my own personal goal and I'm trying to do what I can to show them I'm ready."