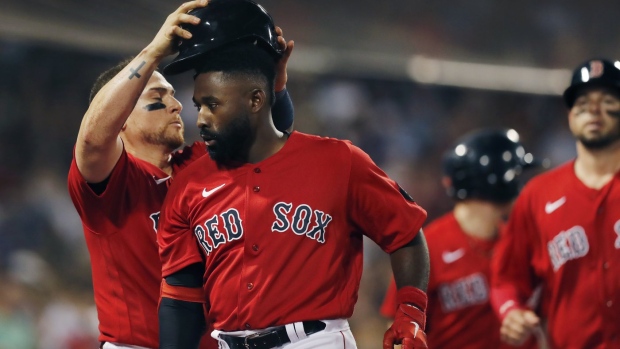 Boston Red Sox's Jackie Bradley Jr., centre, celebrates his two-run home run with Christian Vazquez, left, during the fourth inning of the team's baseball game against the Toronto Blue Jays in Boston, Friday, July 22, 2022. The Toronto Blue Jays have have signed the outfielder to a one-year major-league contract. THE CANADIAN PRESS/AP-Michael Dwyer

The 32-year-old was released by Boston on Thursday. He has a .210 average with 19 doubles, one triple, three home runs, and 29 runs batted in through 92 games this season.

He helped Boston win the 2018 World Series and was named the MVP of the American League Championship Series that year with three RBIs on nine hits in a 4-1 win over Houston.

The native of Richmond, Va., is in his 10th major league season and has a career average of .228 with 329 extra-base hits across 1,099 games with Boston and Milwaukee.

The Blue Jays announced the moves before a game against the Orioles on Tuesday night in Baltimore.