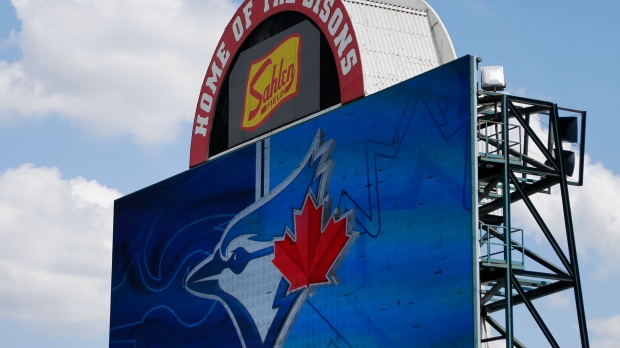 TORONTO - The Toronto Blue Jays will play most of their home games at their top minor-league affiliate's stadium in Buffalo, N.Y. this season.

The Blue Jays announced the decision Friday, hours before their season opener at Tampa Bay.

The team's home opener is scheduled for Wednesday against Washington. Toronto will play that game and Thursday's game at Nationals Park with the Blue Jays as the home team.

After the season-opening series against the Rays, Toronto will play road games against Washington on Monday and Tuesday.

Toronto's first game in Buffalo will either be July 31 against the Philadelphia Phillies or Aug. 11 against the Miami Marlins.

Canada's lone Major League Baseball team was forced to find a new home for this season after the federal government last week rejected the club's proposal for the Blue Jays and opposing teams to stay in the hotel inside Rogers Centre and never leave the facility during stints in Toronto.

The Blue Jays would have needed an exception to the traditional 14-day quarantine from the federal government to play in Toronto during the COVID-19 pandemic.

On a videoconference with reporters last Sunday, reliever Anthony Bass said the players expressed a desire to the team's front office to play home games at a major-league stadium this season.

Before the federal government's decision, the Blue Jays were considering Buffalo and their spring-training facility in Dunedin, Fla.

However, surging COVID-19 rates in Florida and a lack of space and lighting concerns in Buffalo raised questions about both those options, leading the Blue Jays to look at other major-league sites.

After being shut down by Ottawa, the Blue Jays were close to booking Pittsburgh's PNC Park for most of their home schedule, but that plan was kiboshed by state health officials. Baltimore's Camden Yards and Hartford's Dunkin' Donuts Park, home of the double-A Yard Goats, were also reported to be in the running.

In the end, the Blue Jays couldn't find another major-league stadium, and settled on Buffalo.

The Buffalo Bisons became the Blue Jays' triple-A affiliate for the start of the 2013 season. Minor-league baseball has been cancelled this year, creating an opening in Buffalo.

Sahlen Field is in downtown Buffalo, minutes from the Peace Bridge connecting the city to Fort Erie, Ont.

The federal government did agree to the modified quarantine at the Rogers Centre hotel for the Blue Jays' summer training camp, but said concerns about regular cross-border travel along with road games in hard-hit American states made the regular-season plan a no-go.

“I told my friend, commissioner Manfred, that not only is the city ready to welcome the team with wide-open arms, the partnership between Buffalo and the Blue Jays would be a home run for the city, the team, MLB and the local economy,” Schumer said in a release.

It won't be the first time a Canadian MLB team will play an extended stretch of home games outside the country.

The Montreal Expos, owned by the league at the time, played 22 home games a season in Puerto Rico in 2003 and 2004 before relocating to Washington.

This report by The Canadian Press was first published July 24, 2020.