By the Numbers: Rare blowout win gives Blue Jays hope that offence will turn around 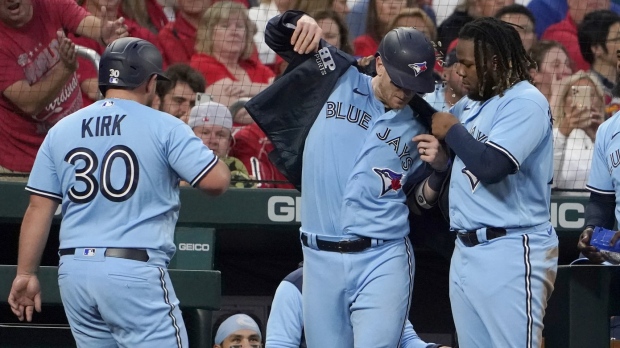 Toronto Blue Jays' Danny Jansen, centre, is congratulated by teammates Vladimir Guerrero Jr., right, and Alejandro Kirk (30) after hitting a three-run home run during the fourth inning of a baseball game against the St. Louis Cardinals, Tuesday, May 24, 2022, in St. Louis. THE CANADIAN PRESS/AP/Jeff Roberson

Toronto Blue Jays manager Charlie Montoyo has long preached that hitting is contagious and that his offence will eventually get on track.

A rare blowout win over St. Louis could be the breakout performance that helps turn things around for Canada's lone big-league team.

After splitting a two-game set with the Cardinals, Toronto enjoyed an off-day Wednesday before continuing a weeklong road trip on Thursday with the opener of a four-game series against the Los Angeles Angels.

Here's a look at some of the numbers that have the Blue Jays sitting in third place in the American League East.

If the Blue Jays are going to be a contender, more consistency through the batting order is a virtual requirement.

Teoscar Hernandez and Matt Chapman are home run threats but both are struggling at the plate with sub-.200 averages.

Hernandez, an AL silver slugger the last two years, is hitting just .152 as he tries to find his form after a 21-game absence due to an oblique strain.

Chapman, meanwhile, is batting .192 on the season, well down from his career .240 average.

Leadoff man George Springer has proven to be a steady presence at the top of the Toronto batting order.

He had a hit, two walks and scored twice in an 8-1 romp over the Cardinals on Tuesday night. Springer leads the team with an OPS (on-base percentage plus slugging) of .859 and shares the team lead with eight homers.

Santiago Espinal, who was recently bumped up to second in the order, has taken advantage of regular playing time at second base. He leads the team among regular players with a .284 batting average.

Catcher Danny Jansen has been a force at the plate despite limited action this season due to a month-long stint on the injured list with a strained oblique.

Toronto right-handers Kevin Gausman and Alek Manoah have anchored one of the better starting rotations in the American League in 2022.

Gausman is 4-3 with a 2.25 earned-run average and has struck out 65 batters — good for fourth in the major leagues — while giving up just five walks.

Manoah, who is 14-3 since making his big-league debut a year ago - is 5-1 this season with a sparkling 1.62 ERA (third-best in the majors). Opponents are hitting just .197 against him this year (seventh-best in majors).

Individual statistics for key players like Vladimir Guerrero, Jr., Bo Bichette, Lourdes Gurriel, Jr., and others are down this season, so it's no surprise team stats are lower too.

Entering Wednesday's games, the Blue Jays were in the bottom third in the major leagues in batting average (.232) and on-base percentage (.301).