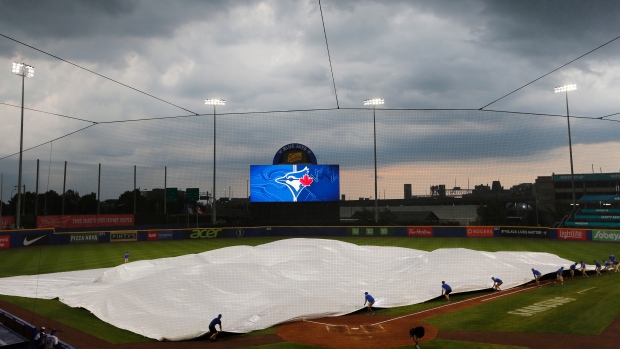 Toronto Blue Jays grounds crew members roll out a tarp to protect the field from rain during the fourth inning of a baseball game against the Tampa Bay Rays, Saturday, Aug. 15, 2020, in Buffalo, N.Y. (AP Photo/Jeffrey T. Barnes)

The Blue Jays named Candaele the manager of the triple-A Buffalo Bisons on Monday.

Candaele began a nine-year major-league playing career with the Expos in 1986.

Candaele managed lower-level Blue Jays minor league teams in Dunedin, Fla., and Vancouver in 2018 and '19 before earning the promotion to Buffalo.

Candaele replaces Ken Huckaby, who was named Buffalo's manager for the 2020 but never worked a game as the minor-league season was cancelled because of the COVID-19 pandemic.

This report by The Canadian Press was first published March 8, 2021.