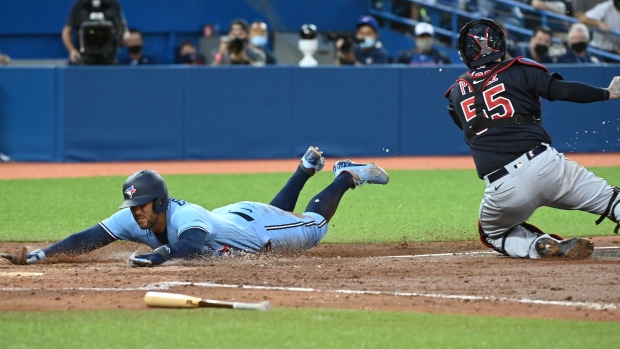 TORONTO - George Springer knocked in three runs with four hits, including another leadoff homer, to jump-start the Toronto Blue Jays to another win.

It's the Blue Jays' fifth win in six games since their Rogers Centre return last Friday.

The Blue Jays recipe for success back at their home field has been early offence and effective pitching from their starters against struggling lineups from the Kansas City Royals and Cleveland (52-53).

This time lefty Steven Matz, before a crowd of 14,410, came through with six solid scoreless innings in his first start in Toronto. He struck out eight and surrendered six hits for his second win in his last six starts.

Meanwhile, the Blue Jays offence produced another 10 hits after scoring a 7-2 win with 12 hits on Tuesday.

The 31-year-old Springer, named the American League player of the week on Monday, continued to play a significant part in the Blue Jays' success over the past week. He slammed his third leadoff homer in five games to increase his career total to 42.

He went 4 for 5, finally flying out to left in the eighth inning. After singling to centre and scoring on Bo Bichette's grounder to shortstop in the second inning, Springer's centre-field double knocked in two more runs in the third.

Springer, signed as a free agent in the off-season, missed a significant part of the Blue Jays' first half with a left oblique strain and right quadriceps ailment.

After Springer's leadoff prowess, left fielder Corey Dickerson pushed Toronto to a 3-0 advantage in the first inning with a two-run double to right. Dickerson was playing in his second game after being sidelined with a left foot injury that accompanied him when he was acquired in a trade with the Miami Marlins in late June.

New Toronto right-handed reliever Joakim Soria, acquired in a trade last Friday, was placed on the 10-day injured list before the game with an inflamed middle finger on his throwing hand. Tayler Saucedo was summoned from Triple-A Buffalo as a result.

Saucedo struggled in relief in the eighth, yielding five straight hits. Cleveland second baseman Owen Miller hit a bases-clearing double down the left-field line with the bases loaded. He then scored on Bradley Zimmer's sacrifice fly to centre.

This report by The Canadian Press was first published August 4, 2021.