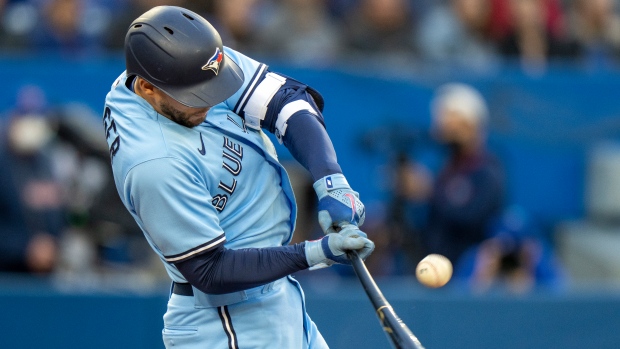 TORONTO - The Toronto Blue Jays have built their lineup around power hitting. But sometimes a softly hit blooper works too.

George Springer had a bases-clearing triple and the Toronto Blue Jays held on for a 3-0 win over the Seattle Mariners on Tuesday. Springer's game-winning hit in the second inning had an exit velocity of just 71.5 m.p.h., a virtual marshmallow, but it dropped under the glove of Mariners right-fielder Steven Souza Jr. as he dove for the catch, allowing Springer to reach third.

“I'll take it, y'know?” said a smiling Springer. “It's not always how hard you hit it, you've just got to put it in the right place.

“I mean, I'm not going to complain about it.”

Blue Jays manager Charlie Montoyo also wasn't going to get hung up on how hard Springer's triple was hit.

“To me that was like 110 m.p.h. that little single Springer hit,” said Montoyo.

Vladimir Guerrero Jr., and Santiago Espinal both extended their hit streaks in Toronto's (20-17) second straight win. The Blue Jays had not won back-to-back games since topping the Houston Astros on April 30 and May 1.

Jose Berrios (3-2) had his best start of the season, pitching seven scoreless innings, striking out four but allowing six hits. David Phelps and Adam Cimber came out of Toronto's bullpen, with Cimber earning his third save.

Berrios's strong outing followed solid performances by fellow Blue Jays starters Alek Manoah and Yusei Kikuchi. All three pitched a minimum of six innings and allowed only one run between them in Toronto's last three games.

“Yesterday I saw Kikuchi, the way he threw, I took that as inspiration for my outing tonight,” said Berrios, referring to Kikuchi's one-hit, six-inning performance in Toronto's 6-2 win on Monday. “ He is proud of me and I did well like he did last night.”

Guerrero's single to shallow left-centre field in the first inning made it 14 consecutive games with a hit for the Blue Jays first baseman. That matched the longest hit streak of his career, when he had a hit in every game between Aug. 23 and Sept. 6 last season.

Espinal also extended his hit streak on Tuesday, with a single to left field loading the bases in the second inning. His 11-game streak is a career best.

After Raimel Tapia struck out, Springer came to the plate with two out. His blooper dipped under a diving Souza, bouncing behind the Mariners outfielder and allowing Springer to slide into third base for a 3-0 Toronto lead.

“I'm just happy that it fell,” said Springer. “It doesn't matter how hard you hit it, sometimes you've just got to put it in the right place.

“There's been a lot of guys who hit a lot of balls hard that don't have a lot to show for it.”

It was Springer's first triple of the season and the 15th of his nine-year career.

Cimber, stepping in as Toronto's closer with Jordan Romano unavailable due to a non-COVID illness, got three quick outs to seal the win.

MAYZA RE-EVALUATION - Left-handed reliever Tim Mayza will be re-evaluated by a second doctor. He was placed on the 15-day injured list on Monday retroactive to Sunday with forearm inflammation.

GOLDEN ARM - Olympic speedskater Charles Hamelin threw out the first pitch. He handed some of his medals to Ace, the Blue Jays mascot, before throwing to home plate. Hamelin won four golds, a silver, and a bronze over his career that encompassed five Games.

LOOKING AHEAD - Kevin Gausman is scheduled to start for the Blue Jays on Wednesday night in the third and final game of the series with Seattle. He has a 2.40 earned-run average so far this season. Marco Gonzales (1-4) will take the mound for the Mariners.