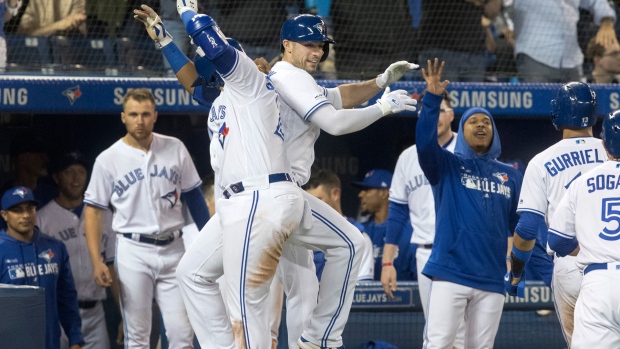 TORONTO - Vladimir Guerrero Jr. hit a three-run homer as part of a five-run eighth inning, and the Toronto Blue Jays rallied for an 11-7 comeback win over the New York Yankees on Wednesday.

Guerrero's homer, a line drive to straightaway centre field off Zach Britton (2-1), travelled an estimated 434 feet and left the rookie's bat at a speed of 109.9 m.p.h.

Randal Grichuk followed two batters later with his second homer of the game and Brandon Drury hit another to put the Blue Jays (23-38) up by four.

Teoscar Hernandez, in his first game since being recalled from triple-A Buffalo, began the rally with a two-run double in the seventh inning to bring Toronto within a run at 7-6.

Cavan Biggio hit an RBI single and Lourdes Gurriel Jr. scored on an error on the 30th anniversary of the first game played at Rogers Centre. Reliever Sam Gaviglio (4-1) earned the win.

DJ LeMahieu had given the Yankees (38-22) a 7-4 lead with a three-run homer in the sixth. Gary Sanchez hit a solo shot and Cameron Maybin drove in another run.

Paxton, acquired from Seattle in the off-season, was making his second start since coming back from the injured list. The towering lefty from Ladner, B.C., missed 23 games with knee inflammation.

Paxton's last start at Rogers Centre was a memorable one - he became the second Canadian in MLB history to toss a no-hitter, and the first to do it on Canadian soil, when he no-hit the Blue Jays with the Mariners on May 8, 2018.

Toronto, which won the first game of the three-game series Tuesday night, assured itself a series victory for the first time since sweeping Oakland from April 26-28.

Hernandez made his return to the big league lineup, starting in centre field for the first time this season. General manager Ross Atkins said before the game that the Jays wanted to give Hernandez time in centre, where he'd made appearances in 20 of his 217 major league games heading into Wednesday.

Hernandez made an immediate impact, doubling in his first at-bat in the second inning and coming around to score on Biggio's single for a 3-0 Jays lead.

Grichuk put Toronto on the board in the first inning with a two-run homer off Paxton but Sanchez got one back for the Yankees on a long solo homer off Thornton in the fourth.

The Yankees took a 4-3 lead in the fifth on RBI singles from Maybin, LaMahieu and Sanchez. But Gurriel rushed home on a throwing error by Gio Urshela to tie the game 4-4 in the bottom of the inning.

NOTES: The Blue Jays selected pitcher Braden Halladay, the son of late ace Roy Halladay, in the 32nd round of the MLB draft earlier Wednesday. Roy Halladay was a former first-round draft pick by the Jays in 1995. The team retired his No. 32 jersey last season. ... The Blue Jays and Yankees close out their three-game series Thursday. Former Toronto lefty J.A. Happ starts for New York. Edwin Jackson will start for the Jays.